Raw Redux (September 17th, 2012): Eve Secures Her Win With a Victory Over Beth 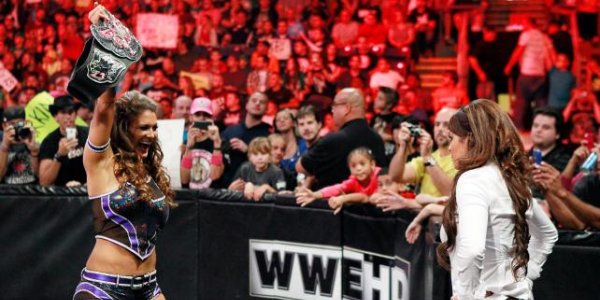 Night of Champions left us with one mysteriously “injured” Diva and a new champion in the form of Eve Torres. Those who didn’t see that coming from a mile away have clearly been living under a rock for the past six months, give or take a few. Eve has been on fire since making out with John Cena back towards the beginning of the year, and many of us thought it would only be a matter of time before she was crowned champion again. After an incredible title match with Layla, the new champion got a chance to step back in the ring. This time her opponent was the rarely seen Glamazon, Beth Phoenix. Let’s take a look and see what went down.

No televised entrance for Beth on this night, but we’re treated to the sight and sounds of Layla joining the commentary booth. Beth looks ready for a fight. Eve comes to the ring smiling from ear to ear, and rightfully so. She’s had one hell of a week and we really can’t fault the woman for that. I’m still jealous over that ring. Good grief. While Eve is getting in the ring and posing with her newly won butterfly belt, good ‘ole J.R. lets us know that Kaitlyn will not need surgery on her ankle. It’s not broken, she just has a few torn tendons and will be good to go soon. That’s amazing news!

The match kicks off with Eve attempting to get Beth to shake her head. Beth obviously knows better than that. Is it just me or does the referee look like Brad Maddox? Am I turning into Bobby and simply wishing for a FCW superstar to make the main roster? Or did they just go down to the local high school and pull some guy from gym class, and ask him to ref on Raw? I’ve never seen this kid before and that disturbs me.

The girls lock off after the busted handshake attempt and Beth draws first blood by knocking Eve to the ground. After that, they jostle back and forth for position until Eve grabs onto a side headlock. Beth battles out and whips Eve into the ropes. Eve pulls a nice little move but ends up paying for it thanks to her hesitation. Beth knocks her down and begins to pound on her. Eve scurries to the ropes but it doesn’t matter. Beth yanks her away. This eventually leads to a Glam Slam attempt by the Buffalo-native, but Eve kicks Beth in the knee and that forces the powerful blond to let the champ slip from her grasps. It doesn’t take long for Beth to recover, though. She ends up punishing Eve a little more, before Eve is able to slip away from Beth.

Beth ends up slamming chest first into the turnbuckle and that allows the manipulative champ to use Beth’s disadvantage to her own advantage. Eve rolls up Beth and gets a nice little victory. She slips out of the ring, celebrates her win, and makes sure she shows Layla the title.

Not a bad match given the short amount of time. Beth and Eve work really well together, and I think Layla did a great job on commentary this week. JBL really laid into her and she had the perfect responses to his criticism. It was also nice to hear her say that she was really upset that she lost to Eve. I also love how everyone working at the broadcast table put over the Kaitlyn injury angle. It gives me hope that isn’t going to get dropped and when Kaitlyn “heals” she will get a chance to face Eve for the title. I would really like to see that match taken seriously and given some time. For some reason I think both of those two could work something nice if given time to plan and execute.

Not much on the Diva front tonight. Our sweet little AJ Lee made the main event match, and that’s about it. Queen Vickie managed Prince Dawlf to a much needed win over Santino. Just an okay Raw, but after a great pay-per-view, that’s usually what happens. We’ll just have to wait and see if SmackDown gives us anything.

Until next time… Cryssi out!