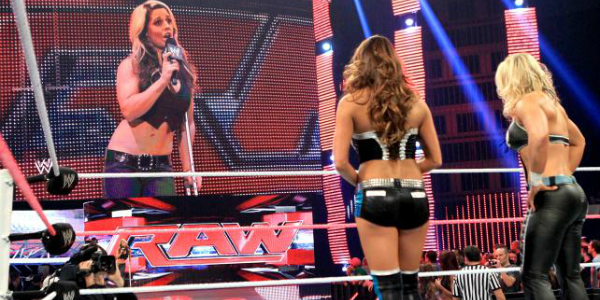 Good afternoon everyone, and welcome to your Raw Redux. This week, we were treated to a somewhat odd tag team match that wouldn’t have been considered odd before two weeks ago. Layla and Alicia Fox, who just came off being opponents in a six Diva tag, team up to take on Eve and Beth Phoenix… who were opponents last week. Luckily though, Kaitlyn makes an appearance after the match to provide us with some Intel on her attacker at Night of Champions! Not only that, but AJ Lee… our crazed GM who’s appearing in less and less clothes each week, gets proposed to …by Paul Heyman! Let us begin since nothing I say could follow that up.

Following the entrances of both teams for this upcoming Divas match — Alicia Fox and Layla, as well as Beth Phoenix and Divas Champion, Eve, the match begins with Layla and Beth. A kick to the abdomen, with a head smash in the corner leads to Layla scoring a crossbody and tagging in Fox! Fox with some nice dropkicks until Beth takes her into the corner… but Alicia nails a split legged sunset flip for a two. She tries some sort of move, but Beth hoists her onto her shoulders and drops her rather violently. She goes for a suplex off the ropes, but Eve blind tags herself in, knocks Layla off the rope and hits the neckbreaker for the win.

After the bout, Kaitlyn comes out from the back and “thanks” Eve for the well wishes she sent on twitter. She then reveals that she scored the security footage from the hallway at Night of Champions… and while she couldn’t see her attacker’s face, she did catch the hair color. Guess what? It’s a blonde! This puts all assumption on Beth Phoenix, who denies that she had any part in this. Eve begins to flip on her partner, drops her title, and drills Beth with the neckbreaker. Kaitlyn looks on as if she doesn’t know what to believe anymore, and I love it.

Also, check out General Manager, AJ Lee, as she appears in a brilliant opening segment that includes naughty texts with CM Punk, a Brad Maddox appearance, and a Paul Heyman proposal!

Thoughts: The match… was short. But truthfully, I don’t think this was really about the match, more so the aftermath. I’m really excited to see where the Diva attacker plot is heading because it’s actual storyline progression! People can say what they want about this story, but the fact of the matter is that it’s a story, which is something the main roster Divas haven’t seemed to really have in a long time. There’s an actual purpose to things, and Eve turning on Beth has me interested to see where things are going with this whole situation. The attacker being a blonde is interesting though. I’ve seen Kelly, Natalya, and even Raquel Diaz thrown into the mix of who it could be. Part of me is hoping the blonde hair was just a wig though because there’s so many options you could think of in that perspective. Whoever it is, I just hope it’s not Eve because I feel like that would be sort of a cop out. A Diva working WITH Eve is much more in the realm of what I want it to be, but who knows? All I know is that I’m looking forward to seeing what happens in the division for a change and I enjoy that feeling.