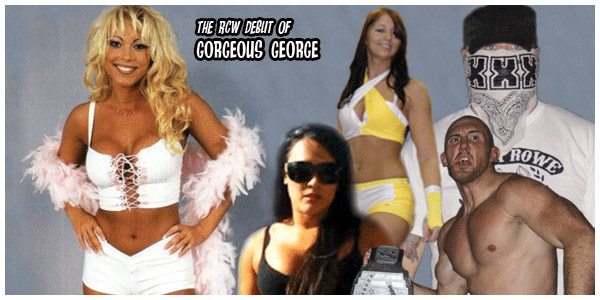 Former WCW star Gorgeous George has resurfaced and will be at River City Wrestling tomorrow night in San Antonio, TX.

River City Wrestling — San Antonio’s brand of professional wrestling — will hold an event on Saturday, April 2 at Good Shepherd Lutheran Church Activity Center, 1630 Goliad Road in San Antonio, TX. The event will begin at 8 p.m. and the doors open at 7:30 p.m. The event is a RCW “Super Show” as the promotion will be bringing in television stars and wrestlers known throughout the world.

+++ TICKETS +++
Tickets will be sold at the door (VIP passes at 7 p.m.) and are as follows: front row, all ages are $15; general admission, adults are $12; general admission, kids ages 4-18 years and adults with a military/student ID are $10; and children three years and younger are free. Advance tickets are online at rcw-wrestling.com, ticketmaster.com, or ticketweb.com. Advance tickets are cheaper than those sold at the door with group discounts also available.

San Antonio’s Most Unwanted (comprised of Joey “Super Shot” Spector, Pink, Nemesis, Major Mike and Chris Sifuentes) lost at “It’s Time 3” to Flash, Darci and Mini-Mex, but the titles were not on the line. On April 2, the group MUST put their titles up against Flash and Darci. It was revealed last event that Darci’s new path set by Sensei Yebisu is to be mentored by the former RCW Champion and TNA Knockout. The duo showed remarkable team chemistry. With The Mini-Mex in their corner, literally anything is possible. And “ooohhhh yeah”… former WCW star Gorgeous George will attempt to keep order in the ring as special guest referee! Can The Unwanted … Joey Spector in particular… handle a female as the authority in the ring?

Girard St. Christopher shocked the RCW world at “It’s Time 3” by pinning Lance Hoyt and winning the RCW Championship. A couple of nights later, fans saw Girard St. Christopher participating on WWE Monday Night RAW. Things are happening very fast for St. Christopher, but the new champion is quoted as saying that he wants to be a fighting champion and give others opportunities just as opportunities were given to him. His first defense will be against the heart and soul of RCW, “El Mamacito” Ann Dromeda. Throughout the years, Ann Dromeda has been a staple in the company, winning the Tag Team Titles multiple times. Can Ann Dromeda make the most of this opportunity by winning RCW’s top prize?