Recapping Brooke on ‘The Amazing Race’: Episode 9, “You’re Taking My Tan Off” 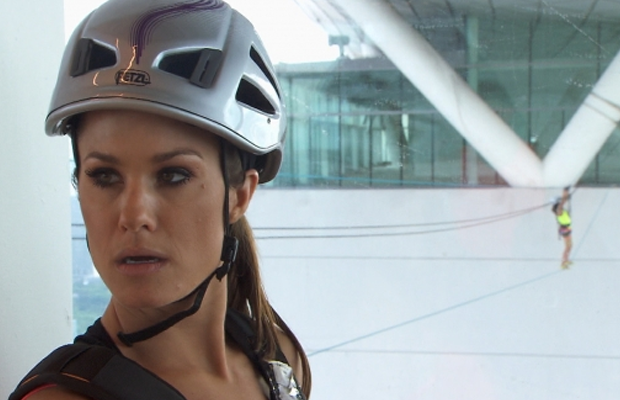 Each week, as long as Brooke and Robbie E are in The Amazing Race competition, we’ll recap the newest episode, updating fans on where #TheWrestlers stand in the race.

This week, the teams head to Singapore. As they are in last place, Brooke and Robbie are the last to depart. The Soul Surfers and The Dentists accidentally book a later flight, allowing the others to move ahead.

When they arrive in Singapore, teams must run a mile to a coconut stand, where they have to drink the contents of one coconut before they receive their next clue.

They’re given the option of competing for a fast forward pass, which they can win if they’re the first team to last two minutes on the Flow Rider. Brooke and Robbie pass on trying it, instead heading to the Marina Bay Sands Hotel, where they reach the leg’s roadblock.

This requires one team member to walk a tightrope between the hotel’s towers, grab a clue, and walk back. Brooke takes the challenge.

She follows Maya of The Sweet Scientists, who completes it and emerge into first place. She completes the challenge without a hitch, putting them in second place.

They head to the Center Square Raffles Place, which brings them the leg’s detour. They have the choice of either taking part in an ancient Chinese cup detox or prepare chili crabs, cracking the crabs until they collect two pounds of meat.

Before they can take the detour, though, they have to find the clue. They have a difficult time finding the man carrying it around the square and end up walking right past him.

Eventually, they find him, and head off to take the China cups challenge. It’s a painful experience, Brooke yelling that they’re taking her tan off.

When they get to the U-Turn, they decide not to u-turn anyone, as The Cyclists are likely far enough behind that their plan from last week isn’t needed.

At Merlion Park, they search for their next clue alongside the Sweet Scientists. The teams split up, and Brooke and Robbie find the clue, moving on to the pit stop. They mislead the Scientists, telling them that they haven’t found the clue.

As the Scientists chase their tails, Brooke and Robbie head to the Fullerton Pavilion, the leg’s pit stop. The arrive in second place, their best placement in the race so far.

Brooke and Robbie have made it to the final four. They live to race another day!

The Amazing Race airs Fridays at 8pm ET on CBS.

What did you think of this week’s episode?