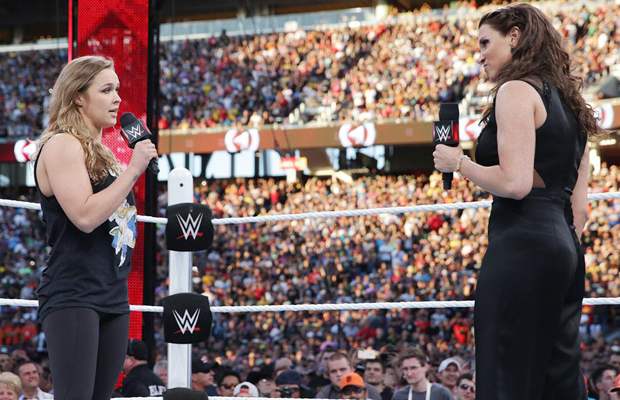 According to a report from F4WOnline (via PWMania), the current high profile plan WWE wants to proceed with for WrestleMania 32 is Ronda Rousey vs. Stephanie McMahon.

Original reports stated that Stephanie may team with her husband Triple H against the team of Rousey and her Furious 7 co-star The Rock. No deal has been set yet, but both sides have indicated that they would like the match to take place.

According to the report, the WWE has had interest in having a match between the two since Rousey attended SummerSlam last year year in Los Angeles. Rousey even took part in an Ice Bucket Challenge video with McMahon.

Before Rousey can commit to any sort of match for WrestleMania, several factors would have to be worked out between WWE and UFC, who Rousey is currently under contract with. There is also belief that if the UFC isn’t okay with Rousey competing, the match could end up being changed to a one-on-one match between The Rock and Triple H with Rousey and McMahon in their corners.

Would you rather see Rousey/Stephanie one-on-one or a tag match including The Rock and HHH?