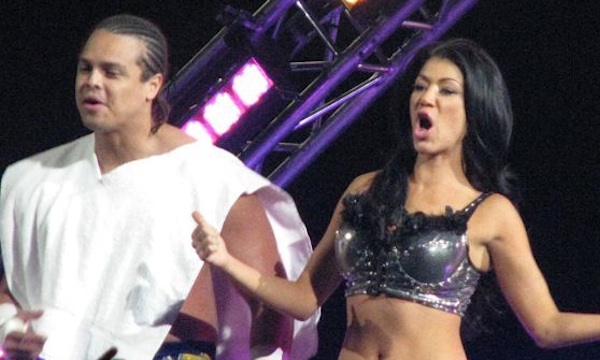 Hey! Just wanted to write to you guys to share my experience on meeting Rosa Mendes and attending an house show on Friday night in Sydney, Australia.

Anyhow, so basically I was able to meet Rosa Mendes & Zack Ryder (though I will keep this diva wise.) They arrived quite late, about an hour or so late, the signing was meant to start at 2:30pm though didn’t commence until shortly after 3:20pm. Anyhow, they came out of this door, and first out was Rosa with a massive crowd reaction, she seemed pleased to be there, and so did Zack, who was shortly behind her, also had a good crowd reaction. They walk out, and onto the the stage, to sign autographs, but before they do Zack apologizes that they are late and that their plane was delayed to over 1 hour. Rosa then gets the microphone and asks does anyone know how to salsa dance? And then starts dancing.

After a while, I finally get up to meet them, even though Zack was there, I really only wanted to meet Rosa Mendes to be honest. Beth Phoenix was meant to be at this autograph signing until she was pulled from the tour after her personal life. As soon as I got up there I said a massive hello to Rosa, who then said another massive hello back. They were kind of rushed, but I took my time, I got my picture taken with both, and then Rosa said to me “I’ll sign this for you” to which I said “Aw, thanks” and she again replied “No worries, no need to say thank you.” I then said to both “I will tweet you guys the picture” to which they both laughed, yay I made Rosa & Zack laugh! :D Rosa then replied “Don’t worry I will re-tweet the picture for you.” And I was like “Oh well you are following me, so I do hope you see it.” After I told her that she looked a little shocked but then replied with “Then I will most defiantly see it and re-tweet it for you.” To which Zack said “Sure, sure” in a joking matter, to which Rosa said “Don’t listen to him, I will.”

Then it was time for my dad to get his picture taken, so I was still on stage waiting, to which afterwards Rosa waved a good bye and a kiss towards me.

So we finally arrive to the Allphones Arena in Sydney for some Raw action. Like before, will try and keep this diva wise, but once we arrived, I just had to take an awesome shoot of where our seats were.

1) Brodus Clay w/ Naomi def. Jack Swagger – Yeah, there was no Cameron Lynn in sight at all, which I thought maybe she didn’t come to the tour, but then I saw the pictures on WWE.Com for the event the night before in Brisbane, she was there with Brodus and Naomi, so maybe she has got pulled of the tour or maybe even released. Either way boring match, with a few fans chanting to Brodus “You can’t wrestle” the match only mainly consisted of them dancing. The same fans who were chanting to Brodus were also chanting to Naomi “DUI & Bribe The Police” before I quickly informed them that they were yelling out to the wrong girl, as it was Cameron who got arrested and Naomi was actually out ringside, to which that quickly shut up for the rest of the match.

2) WWE Diva’s Champion Layla def. Rosa Mendes – Wow. Even though I love the divas, and love Rosa, this match was quite bad to be honest. I do know that Layla and Rosa can wrestle, but it seemed like they had loads of limitations placed on them tonight. After a few comedy spots, one was really funny in particular where Rosa kept running the ropes even though she didn’t have to, and after some dancing, yes again, dancing, some wrestling was involved. Rosa actually got massive heat in this match, and there were massive “Layla” chants going on that lasted for about 30 seconds. Though with that being said there was also a loud “Boring” chant happening in the process, as Rosa kept the same move on for about 2 minutes, which killed the crowd. Layla also botched her springboard crossbody as she slipped. Anyhow, after about 6 minutes of action, Layla put Rosa away with the Chick Kick to retain the Diva’s Championship.

5) Epico & Primo w/ Rosa Mendes def. Tag Team Champions Kofi Kingston & R-Truth w/ Little Jimmy – This was a really awesome match, and saw loads of wrestling and loads of action, and even Rosa got involved. At the end of the match, Epico hit a painful botched Backstabber onto Kofi (I believe it was) and as the ref went for the three count, Kofi put his leg on the rope, though Rosa knocked it off, giving Epico & Primo the win and the Tag Team titles.

As they celebrated, general manger AJ Lee came out and reversed the decision.

6) Kofi Kingston & R-Truth def. Epico & Primo w/ Rosa Mendes – As soon as AJ said that, the match quickly started and quickly ended with both Kofi and Truth hitting their finishing moves and retaining the championships.

That was all for the divas wise of the show, even though I do believe Rosa/Layla has been the worst divas match I have seen live (I have been to seven house shows) it wasn’t bad for what it was, and I loved that Rosa was also used a lot in tonight’s show.

After the show had finished, I got a program guide, which all has Eve Torres (man I wish she came), Layla, AJ Lee, Naomi & Cameron Lynn on the cover. Also with that being said, I looked inside and the hottest and the best profile goes to Alicia Fox (who I also wish she came.)

Check out some pictures below: