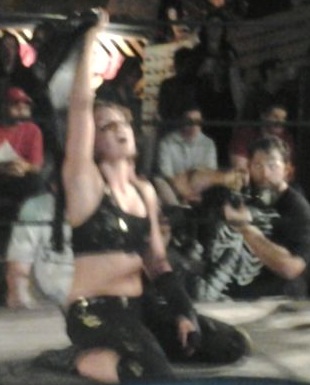 One half of the Canadian Ninjas, Portia Perez briefly won the ACW Championsip at Anarchy Championship Wrestling’s Lone Star Classic event this past weekend.

Results and pictures courtesy of Brandon.

Brandon here, and HISTORY WAS MADE at ACW’s 6th Annual Lone Star Classic with Portia Perez winning the ACW Championship from Darin Childs and Rachel Summerlyn in a 1st round match in the Lone Star Classic. This makes Portia the 1ST FEMALE to ever hold the company’s top prize. Portia Perez elimitation then champ Darin Childs with a flurry of Superkicks, then eliminated Rachel Summerlyn with a roll up with feet on the ropes to make history for the company.

But her history making reign came to an abrupt holt in the Semi-Finals (about an hour later), when she fell to JT Lamotta due to a distraction by Robert Evans. Afterwards he came in the ring and hit a Tombstone Styles Clash on Perez, and announced that on 1/15/12, Robert Evans will face Portia Perez at Guilty By Association 6 (ACW’s Flagship Show).

Also in American Joshi Championship action, the champ Athena successfully defend her title against Angel Blue in a good back and forth, heel on heel match. Things got real before that match when Athena got on the mic and she said that as the ACW American Joshi Champion, she felt insulted she had to put her belt on the line against Angel Blue. She also added that if Jessica James was a stepping stone, then Angel Blue was the “sore beneath her feet.” OUCH!! She offered and opprotunity to avoid the ass whoopin she was about to give her, and the offer was to just leave. She concluded that the fans don’t want Angel there (myself included. Angel Blue, next to Portia, is the most hated in ACW). Angel respond to Athena to “Go F*** Yourself, B****!”

Thoughts: It’s no secret the ACW presents equality to both the guys and girls, and has develop the strongest women’s division in not only in Texas, but in the world. But when Portia won the ACW Title, my jaw dropped, thus solidifying that anything can happen in ACW. Portia has been the most cunning, vindictive heels in wrestling for years, but here in ACW, she is 10x as vindictive as possible. Putting the belt on Portia show how the company has a lot of thrust in the girls to carry on with the show on their own. It’s been proven in the past with Queen of Queens, main eventing the December 2010 show, performing show-stealing match (i.e. 10,000 Thumbtacks Match with Athena and Rachel Summerlyn), and most importantly getting down with the tough males as well. Speaking of Athena, I can go all day with her. After that show, all I can say is this: GIVE HER A PIPEBOMB! We all know how great she is in the ring. But when she’s on the mic, she is just on point. The way she grilled Angel Blue, so eloquently and so “in-your-face” like, proves that she is indeed the total package. Though I’m not the biggest Angel Blue fan, she gave a fight to the Goddess. And she gets heat like no other.

People get a bad impression on women’s wrestling because of what they see on TV with WWE and TNA, due to the demographic the mainstream follows. But if you love seeing women being on a top star level, check out ACW’s American Joshis, because the girls are the stars in their own right.