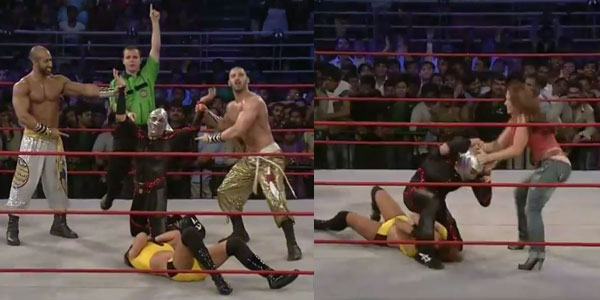 To get the elephant out of the room… yes, that is a title I never thought I’d use on any form of recap since well, I’m sure you all know the reason why. Nevertheless, greetings everybody and welcome to the third edition of your Ring Ka King Write-Up! After getting a feel for both of these women over the past few episodes, Alyssa Flash and Raisha Saeed will do battle tonight in what’s sure to be an interesting match up to say the least. Let us get into the action as I’m sure you’re all skipping over whatever I type here anyways to see just how the match plays out!

The tremendous theme song of Alyssa Flash hits, as I proceed to embarrassingly sing along while the yellow and black clad bombshell steps out in front of the adorning Indian fanbase. Flash looks to be the fan favorite in this battle as she claps and poses for the fans, before being cut off by the catchy theme of Raisha Saeed and the Sheiks! Saeed poses on the ring apron while keeping her hands in air for this funky pose as I’m kind of confused, yet amazingly intrigued towards questioning if Miss Raisha is the same gender as Alyssa.

Nonetheless, this new flat chested version of Miss Raisha graces us with her presence tonight, as I just now realize and say to myself: “Oh my God, this is the greatest match I’m ever going to recap!” The two ‘ladies’ circle around the ring as one of the Sheiks pulls at Alyssa’s foot briefly. Flash with a waist lock, before Saeed reverses it. They tangle around the mat a bit, before exchanging wrist locks. Alyssa with a headlock as she comes off the ropes with a shoulder tackle and a body slam! Flash with a nice elbow drop, but only gets a two count.

Miss Raisha sends Alyssa off the ropes, but the Future Legend ducks a clothesline attempt and comes off the ropes with a flying crossbody for a two count! Alyssa rallies the crowd up as she climbs up to the top rope, before Miss Raisha cuts her off to the Sheiks approval. From there, Miss Raisha slams Alyssa’s head into the mat and proceeds to grace us with her palm pose. A few kicks to the hand garners this beauty a two count, as she picks Alyssa up and throws her into the corner. Flash comes back with a boot to the face, before making a come back with a pair of clotheslines! She ascends (actually more like leaps) onto the top rope and flies off with a nice front dropkick for a two count! Flash can not believe that Miss Raisha has kicked out, but that’s why you can’t doubt the power of such a dominating lady.

Alyssa picks Miss Raisha up, but the masked beauty reverses what she was going for into a finisher that gets cut out so I can’t really tell what it is. Some type of version of the Unprettier I think. Nonetheless, Miss Raisha throws herself on top of Flash and gets the victory!

The Sheiks celebrate as Miss Raisha executes her palm taunt while they raise her hands in victory. They then kiss her masked head, while Miss Raisha begins to attack Alyssa after the match! She continues to destroy her, as the Sheiks take out the officials trying to help the Future Legend. Suddenly, a team of male wrestlers come out to take the Sheiks out, and here comes Mickie James! Mickie grabs Miss Raisha by her mask and proceeds to punch and throw her out of the ring! James checks on Alyssa at ringside, as this phenomenal segment comes to a close and we head backstage to an Indian version of Hornswoggle.

Thoughts: This truly was the best match I have ever, and will ever, recap. Miss Raisha has completely made my night and I’m now going to start a Twitter petition so WWE can swoop her up. In all reality, I did enjoy the bout even if it felt a little short. I wish we could’ve seen the finish, but what can you do? I like Alyssa more as a face than a heel, and I’m personally glad to see Mickie run out at the end to continue her feud with Saeed. Hoping to see them get a one on one match before it’s all said and done with a good time limit.