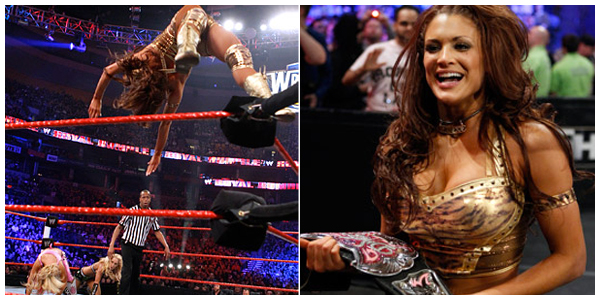 To say last night’s Royal Rumble pay per view was random would be an understatement. Within a course of a week, we had gone from Natalya vs Melina to Natalya vs Lay-Cool and now to Eve involved as well. So confusing. It’s enough to make you need a stiff drink.

Under the guise that we are going to have a two-on-one handicap match, Lay-Cool make their way down to the ring with Michelle McCool this time looking extra flawless. (Sorry Lay!) The Divas Champ is out next and we are ready to go…. Not so fast.

That dastardly GM’s laptop (this isn’t Raw!!!) rings and we get the announcement that this will now be a fatal four-way match with another Diva involved. Cue gasp as we all think ‘OMG AWESOME KONG‘… eh, way to get your hopes up. Beth Phoenix? I mean, she does have singles victories over both Layla and Michelle in recent weeks… eh, think again. Eve Torres‘ music hits. Oh.

Eve, who has barely been involved in any storylines or in the title picture for several months is the last minute addition to the match. Of course, simply from her entrance we should have realised she was going to win. Why else would you inject her into the match? More on that later.

Anyhoo, the match gets underway and we have a Diva melee! Michelle and Natalya on one side and Layla and Eve on the other. Where to look?! This match could get problematic. Michelle now switches to Eve and Layla to Natalya. Michelle’s got Eve in the corner and Layla throws Nattie into the ring post. Lay-Cool use some team work as Layla throws Eve to the wolves (well, Michelle) for a clothesline. They then switch positions with Layla hitting the clothesline this time. Lay-Cool then hit Eve with a double front-first leg-sweep in an attempt to mangle that pretty little face, before taunting her.

Michelle runs Eve out of the ring and in the corner, Natalya is getting back to her feet taking down both Layla and Michelle with clothesline. She seemingly has Layla in a big swing position but Michelle sneaks up behind her and gets a kick for her efforts. Natalya then slingshots Layla into Michelle, which ejects the latter from the ring. Natalya goes for a pin but McCool — being a friend or being advantageous, you decide — pulls Layla out of the ring.

Natalya joins them outside of the ring where Layla hits her with a hard clothesline, sending Natalya’s head against the floor. Insert cartoon birds here.

Back in the ring, McCool can see Eve climbing onto the apron and runs at her, striking her with a vicious knee and sending her hurtling back to the floor below. That’s why she’s Miss McCruel!

It’s the moment we’ve all been waiting for: Lay-Cool face off! The two Divas stare down each other unsure whether to strike, after all there can only be one champion. A very cool teaser.

But before they can make up their minds, Natalya grabs Layla’s legs from the outside of the ring as Michelle seeks retaliation by kicking her through the ropes. The action gets fast now as Eve sneaks into the ring and rolls up McCool but Layla breaks it up. Natalya enters the ring now with a big discus clothesline on McCool as Eve hits a dropkick on Layla. Michelle is tossed out of the ring by Nattie as Eve squares up to the champ, putting their babyface bond aside in pursuit of the butterfly.

Natalya sets up Eve for the Sharpshooter but Layla comes running at her with a punch, before stumbling over Eve and falling atop her. You know what’s coming… double Sharpshooter! The crowd pops big for that one but the fun is soon broken up by Michelle who hits a perfectly executed kick to Natalya’s head. Her kicks are always so vicious and believable!

McCool attempts to pin Eve but she kicks out. Eve then rolls Michelle into a small package but it’s broken up by Layla, who then hits a vicious Lay-Out on Eve. With Eve laid out by the side of the ring, Michelle McCool — once again displaying her cunning in-ring psyche — hits a baseball slide taking her out of the ring leaving the match to just three competitors.

Lay-Cool walk into a double clothesline from Natalya, followed by individual clothesline. Nattie then picks up Michelle for a big sit-out powerslam followed by a pin attempt but shock horror, Layla breaks it up. Layla and Natalya exchange forearms before Nattie picks her up and rams into the corner and hits a discus clothesline on her in the corner. Natalya picks up Layla on her shoulder and at that very moment, Michelle comes running at her with a big running boot but catches Layla instead. Uh oh!

Natalya uses the distraction to roll up McCool but she kicks out. McCool goes for a kick but Natalya catches her leg and pushes her out of the ring.

Meanwhile, Eve is back up and sneaks into the ring, tossing Natalya out. Seeing Layla laying in the corner, she senses the opportunity to hit a gorgeous moonsault. The referee makes the three count, but doesn’t see that Michelle has Natalya rolled up for the three count too!

Eve’s music finally hits after what seems like the longest two seconds ever, confirming her as the new Divas Champion with the referee raising her arm.

So Eve is the new Divas Champion much to the shock and dismay of everyone…? From a storyline standpoint, it was bizarre to see Eve even included in this match because as mentioned earlier, Beth Phoenix has more of a case with singles victories over both Layla and Michelle in recent weeks. Even Melina, who has been feuding with Natalya, would make a little more sense.

What’s clear is that the storyline up until last night didn’t matter. Instead, last night’s show saw many random angles — not just for the Divas, but the men too — setting up storylines for the upcoming months. Eve is definitely a favourite amongst WWE officials and extremely well-liked backstage, so it seems to me that this could be a case of them wanting to push Eve in the biggest period of the WWE calendar: the road to WrestleMania. And with the questionable finish, where Michelle McCool seemingly had the match one too, it could be that WWE are leaning towards Eve vs Michelle (and Layla to an extent) in the coming months, possibly at WrestleMania 27.

As for the match, I had two different reactions to this match. Watching it live, I thought the ring work was extremely strong from all four girls but the match had little flow and seemed to be all over the place. Watching it back a second time, I thought it worked much more enjoyable and seemed to flow a lot better. Highlights include Natalya’s double Sharpshooter, Eve’s breathtaking moonsault and of course, that Lay-Cool face-off teaser was just superb. An enjoyable match, despite the shock outcome.

Elsewhere, following the great backstage segment between Gail Kim and the Bella Twins last Monday on Raw, we saw some continuation last night at the Rumble. I guess this made up for the ‘WTF?!’ moment just seconds before.

Gail Kim and Daniel Bryan are seen all lovey-dovey before Josh Mathews gets a quick interview from him. The Bella Twins appear, flowers in hand, and give the pair a faux-apology for their actions last Monday. However, the apology soon turns into the twins taking some sly digs at Gail. It all pops off when Gail — shock horror! — gets their names wrong, calling Brie ‘Nikki’. Brie slaps Daniel Bryan which results in Gail hitting her hard with the bouquet of flowers. The two Bellas wail on Gail (ha!) as DB tries to break things up. Caught in the fray, Bryan gets hit with another hard slap from one of the twins. Daniel tries to protect Gail but ends up scratched and clawed by the Bellas as the WWE officials try to break things up. Well that was fun! A lot of fun!

Speaking of random Diva moments at the Rumble, Kelly Kelly — who’s supposed to be tangled up in a storyline with Drew McIntyre — found herself involved in the World Heavyweight Championship match between Edge and Dolph Ziggler? Why? God knows.

But with Vickie Guerrero on the apron getting in Edge’s face, Kelly appears out of nowhere, pulling Vickie off the apron, slapping her and mounting her with a Thesz Press. Well, okay then. Hopefully WWE will explain this in some way on SmackDown this coming Friday. Perhaps Edge, figuring Vickie would try to get involved, paid her off to come help him out? We’ll see.

On the whole, last night’s pay per view delivered a lot of random moments and one big WTF. But regardless of where you sit on Eve’s title win, it was actually pretty fun Diva-wise.