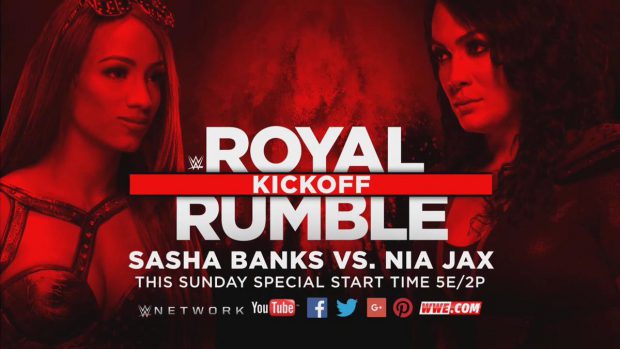 Tonight on the Royal Rumble Kickoff, Nia Jax and Sasha Banks go head to head. Which Superstar will emerge victorious? The Diva Dirt team weighs in:

Abir: After her weird loss on RAW to Bayley a few weeks back, I see Nia’s match following a similar fashion here. Sasha Banks will force her to tap to the Bank Statement, and a rampage from the loser may follow it.

Alex: On paper, Nia should win and look like a monster heel, but if she’s going to spend this match doing hairmares and running into Sasha then no. There’s no point in one of the WWE’s most popular women of all time to job to someone so green and basic. Let’s also not forget that Sasha is still redeeming herself after quite a prolific loss at Roadblock and an injury, so she’s not in the best position to take another L. So let’s just have the super popular Sasha Banks win, let Nia squash Dana Brooke or Emmalina or someone… Sasha will probably roll up Nia during a Powerbomb attempt for the sneaky win.

Jack: SURELY Nia has this in the bag? If not, her character will be buried further than what it was. If Nia is supposed to be dominant, why is she easily distracted (losing to Bayley on Raw) and why did she tap to the Disarmer at Survivor Series? Nia Jax needs to win to further this feud.

Josue: If the word going around that she is in the works for a big WrestleMania match, I see Sasha Banks coming out victorious tonight. Since Roadblock, one of the things Sasha has going for her right now is this “Broken Boss” bit and what better way to some redemption than with a big win over the dominant Nia Jax.

Kyle: Nia Jax in a squash.

Matthew: Sasha Banks should handle Nia Jax in the long haul, but in order for Sasha to be Women’s Champion once again, she needs to go through Nia, which is exactly what Sasha Banks will do.

Stephanie: This is a tough one. Nia needs this win so she can continue to showcase her power but Sasha also needs this win because she’s always coming up short even though she’s one of the best on the roster. I’m predicting an interference finish that extends the feud. However, if that doesn’t happen, Nia Jax will plow through Sasha and continue Sasha’s never ending “injury prone”/questioning her ability to wrestle, storyline.