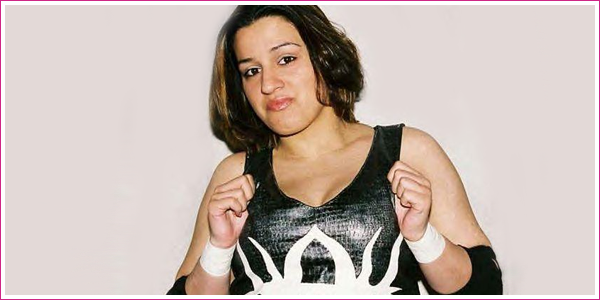 Despite her young age, Ariel (not to be confused with Shelly Martinez) has experience and skill well beyond her years. The terminally cute tomboy has wrestled all over the indies, becoming one of wrestling most decorated females along the way.Â
Â
Starting her career at he tender age of 17, Ariel, (a native of Portugal), originally debuted for South Coast Championship Wrestling. From there she went on to compete in promotions such as GLORY and NWA/IWA to name a few. In a relatively short time, Ariel amassed over a dozen title reign both single and tag team. Notable feuds include Awesome Kong, Nikki Roxx(Roxxi), and Mercedes Martinez.Â
Â
In 2005 Ariel appeared on Volume 1 of SHIMMER with a win over Rain (Payton Banks). She’s been a fan favorite ever since, picking up several singles wins. Ariel has also had tag team sucess with her regular SHIMMER partner, Josie(Sojourner Bolt)Â
Â
Ariel was entered in the tournament to crown the first ever SHIMMER Champion, but was defeated in the first round by Alicia. Her highest profile match to date is featured on Volume 21, where she takes on Cheerleader Melissa, Awesome Kong and old rival, Mercedes Martinez in a four corner elimination match.Â
Â
As is the case with most of SHIMMER’s wrestlers, Ariel would be best suited for TNA. Her less-than-modelesque looks, and tomboyish style would make her stand out in WWE and not in a good way. I would love to see her reunite with her old partner, Sojo in TNA. They work great as a team and would give The Beautiful People/Mi Pi Sexy a run for their money. As usual, here’s a few vids to get you familiar.