SHINE 10 in Review: As the Title Tournament Takes Shape, is Valkyrie’s Dominance Coming to an End? 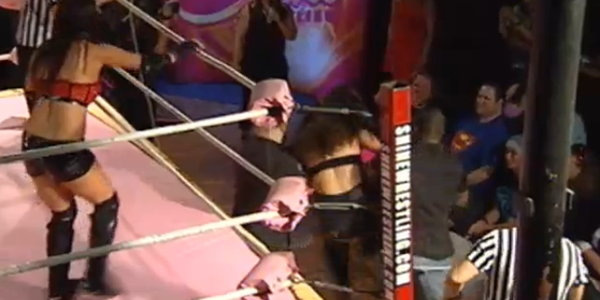 SHINE 10 ended in controversial fashion on Friday night, with a  failed sneak attack by Allysin Kay and subsequent suspension giving us the first sign of cracks in Valkyrie’s previously united and dominant front.

In the main event, Valkyrie leader Rain faced Angelina Love in a rematch from their SHINE Championship tournament qualifier at SHINE 9. Rain came out victorious last time thanks to the aid of her cohorts as ringside, so to level the playing field this time, her accomplices were banned from interfering in the match. It was a close affair, until out of nowhere Allysin Kay crept up and took out the secondary referee at ringside. While the in-ring referee was distracted, Kay then snuck into the ring and clobbered Love with a bat, allowing Rain to get the pinfall. However, SHINE Vice-President of Talent Relations Lexie Fyfe was less than impressed, ordering the match to be restarted, and suspending Kay for 90 days in the process. Love would not be cheated on the restart, hitting a huge Botox Injection to pick up the victory and avenge her previous loss.

In what was certainly Valkyrie’s least successful show to date, Kay’s Made in Sin partner Taylor Made also came up short, being pinned in a good match against Leva Bates dressed as Mad Max (not Cher, as I embarrassingly thought). Earlier on, Kay herself had been victorious against Nikki Roxx in a solid qualifying match which ultimately was all for nought, as her suspension means she will be unable to compete in the tournament. Her replacement has not been chosen, but Roxx will certainly feel deserving of another shot after this. Valkyrie’s only consolation came from Ivelisse, who was up against the debuting veteran Amber O’Neal. Ivelisse picked up the win in a fine contest, pinning O’Neal with a Disdain, and ensuring that Valkyrie’s credibility remains somewhat intact.

The match of the night came from Mia Yim and Mercedes Martinez, who faced off in qualifying action. In a thrilling and hard-fought war of attrition, it was Yim who would grab the surprise victory, countering Martinez’s Fisherman Buster into an inside cradle to pull off a massive upset and advance to the championship tournament at SHINE 11.  Meanwhile, the final tournament place was won by Santana, who wowed the audience with her usual incredible displays of athleticism, defeating Kimberly in a high-octane bout to keep her title aspirations alive and pile more misery onto a Kimberly who has had her fair share of misfortune in recent months.

Jessicka Havok had already qualified for the tournament back at SHINE 9, but after a war of words on Twitter with Canadian Ninja Portia Perez, decided to put her spot on the line in an attempt to prove who the better woman is. Perez was her usual playful self, keeping Havok on her toes with her unorthodox style before finally succumbing to the Air Raid Crash, meaning Havok’s place in the tournament remains safe. Finally, the team of Sassy Stephie, Jessie Belle and Sojo Bolt defeated Heidi Lovelace, Luscious Latasha and Solo Darling in a fun six-woman tag match that did well to break up the tournament action and give some exposure to up-and-coming talents on the SHINE roster. The rookie Solo Darling particularly impressed, and seeing Stephie pick up the victory for her team was a rare and welcome surprise – more of that please!

Ten shows and almost a year in, SHINE continues to have the most consistent product in women’s wrestling today. The eight matches were all top-quality, and woven together with straightforward but intelligent and positive booking that leaves us asking all the right questions. One gripe I had with last month’s show was the length – at over three hours long, it finished as dawn was breaking where I live – and this was corrected this time round, with SHINE 10 clocking in at a little over two hours. Away from the action, Daffney‘s new managerial role, which saw her scouting each match meticulously at ringside, adds a nice touch of speculation towards future alliances and rivalries, and her successor as ring announcer Chasity Taylor did an excellent job on her first night. Meanwhile, Dave Prazak was a welcome asset to the commentary table, his extensive wrestling knowledge providing a colourful verbal backdrop to the action.

The title tournament lineup is complete save for one, and judging by the quality of the talent we look set to see some sensational matches, with all of the seven current qualifiers in with a serious chance of victory. The tournament will take place in its entirety on July 12th at SHINE 11, and whoever is crowned champion that night will have the privilege – and responsibility – of being the face of the most exciting women’s wrestling promotion right now.