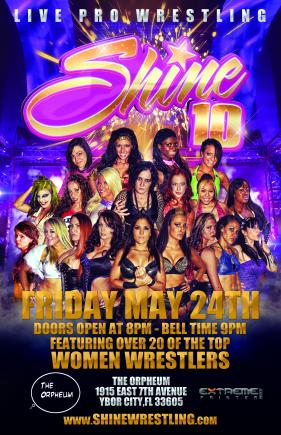 The final four qualifying matches of the SHINE Championship tournament have been announced, and will take place at the company’s next event, SHINE 10, on May 24th.

The draw leaves plenty of interesting possible outcomes, with many prominent feuds having the potential to be intertwined or furthered. Mercedes Martinez faces Mia Yim in her qualifying match, while Nikki Roxx, with whom Martinez has developed quite the rivalry in recent months on SHINE, faces Allysin Kay knowing that victory could result in her and Martinez meeting again, but this time with much more on the line.

Kay, meanwhile, will almost certainly be going into that match with the possibility lurking in the back of her mind that her Made in Sin partner and Valkyrie teammate Taylor Made could well be her opponent later on in the tournament. Taylor Made will be facing a Leva Bates who is riding a wave of momentum following her epic victory over Kimberly inside a steel cage at SHINE 9. Finally, Kimberly looks to redeem herself when she faces Santana, a woman who some have suggested could be the one to creep up under the radar and win the whole thing.

Throw in the already-qualified quartet of Jessicka Havok, Rain, Saraya Knight and Jazz and the possibilities for tournament proper when it happens at SHINE 11 are endless!

See below for the card so far:

* Leva Bates vs Taylor Made

SHINE 10 takes place on May 24th at the Orpheum in Ybor City, Florida, and will be broadcast live on iPPV at WWNLive.com.