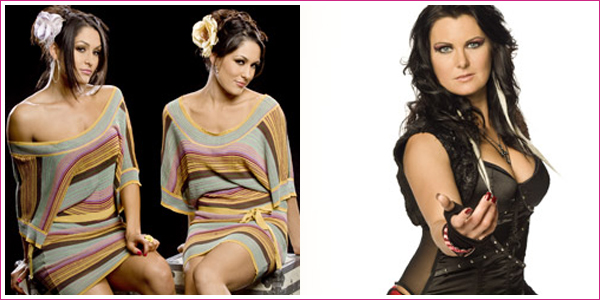 It’s unanimous that the ‘Trump Trade’ two weeks ago helped beef up Monday Night Raw, gaining the services of two Diva Dirt favourites, Alicia Fox and Gail Kim. Meanwhile, it’s becoming clearly evident that SmackDown is now suffering due to the lack of Divas available — case in point, we pretty much saw the same tag team match two weeks in a row with just one line-up change [Eve for Maria on yesterday’s show]. Make no mistake though, I’m not knocking our blue-brand girls, they are definitely making the best of a bad situation; the work continues to be of a consistent standard.

It’s clear to me that the division is soon going to run out of match options considering the five active Divas it has — there’s only so many times we can see the same matches, right? I think it’s time WWE did something about that before the division starts to suffer — a kayfabe ‘Diva exchange’ between SmackDown and ECW. It shouldn’t be too hard to explain on television either, after all ECW GM Tiffany is the protege of SmackDown’s GM, Teddy Long, they are on friendly terms. Plus as a female GM, would Tiffany not want her Divas to be able to compete for a title? It’s win-win all around.

The ECW Divas – the Bella Twins and Katie Lea – can work matches on SmackDown, allowing fresh match opportunities. Plus they’d effectively have the chance to compete for the Women’s Championship, creating for more title storylines i.e. Katie Lea in the title picture.

With SmackDown and ECW working together, the combined division would be a little more evened out: Babyfaces led by Melina would include Maria, Eve and the Bella Twins. The heels led by Michelle McCool, would include Layla, Katie Lea and eventually Natalya.

Plus there’s some prime cuts of meat in FCW that could more than handle themselves on SmackDown, for example veteran Serena Deeb [who really doesn’t need to be in developmental, let’s be honest] and ‘homegrown’ talent, Angela Fong.

What do you think, should SmackDown and ECW once again exchange talents — even if limited to the Divas?