British Empire Wrestling will hold the fifth installment of their longest-running annual event, Empire Fights Back 5, on Dec. 2. Ahead of their anticipated event, Diva Dirt’s Kristen Ashly discussed refusing to look pretty, training like a guy, and grateful promotions with resident “psychopath” Skye Smitson.

BEW was founded in 2014 by Declan Kellett and Tim Birkett, and stands as one of the leading brands in professional wrestling located in London.

As crusaders in the industry, BEW boasts that the most central part of their organization relies on women’s wrestling.

BEW continues to look for fresh talent to build a solid women’s wrestling foundation. Skye Smitson has the unique look and moves that fans clamor for.

Skye Smitson is known for her attitude, grim nature, and overall badassery. Smitson shared how she came to BEW, and her experience leading up to her current tenure.

“Hilariously, I was made to try out like some lower level athlete, with a bunch of untalented unimpressive morons.

I have been wrestling since 2012; that’s six years, I had my first match six months after I started training. I’ve wrestled all over the UK for some of the top companies in the world. I’ve wrestled in Germany, at the best company in Germany.

I was trained by one of the toughest guys I know, “The UK Kid”, and I was trained like a guy, I got hit like I was a guy, and taught to hit everyone like they were the only thing standing between me and my dreams. I wasn’t allowed to roll out when I got tired or I thought I’d done enough. I was taught to push through every barrier, even my own boy. I’ve had broken bones, and bleed inside the ring, and NONE of that stopped me getting what I wanted. Yes, maybe some people don’t know about me, but sooner or later, people find out exactly how much of badass I am and exactly what I’m capable of. Everything I’ve been through has made me the tough bitch that stands across the ring, ready to go through any and everyone that dares stand across from me.” 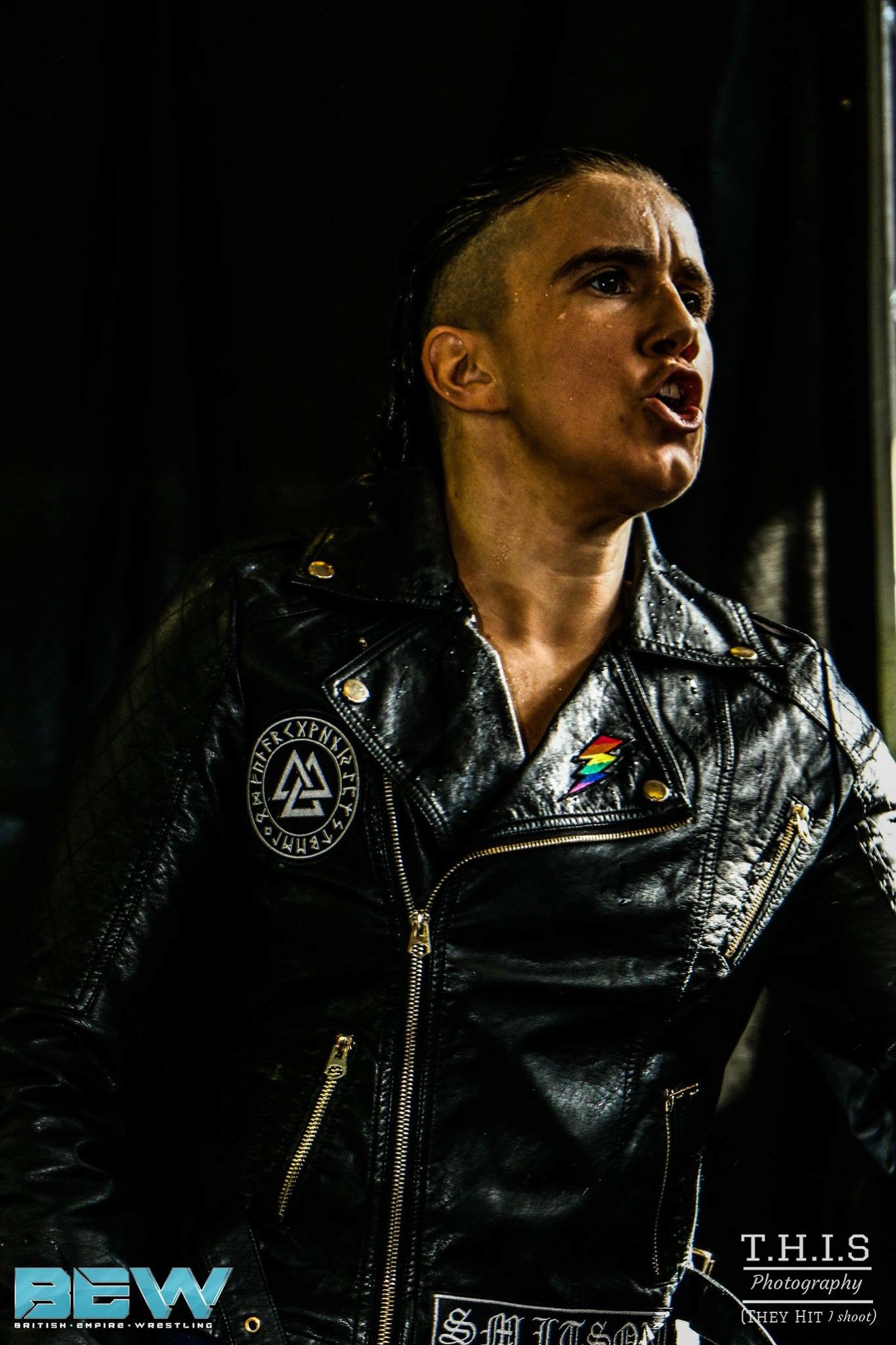 With a list of wrestling influences including Dusty Rhodes, Fabulous Moolah, Goldust, Shawn Michaels, Victoria, The 9th Wonder of the World ‘Chyna’, Jacqueline, British Bulldog, Eddie Guerrero, and Mae Young, it’s no wonder why Smitson’s look is hardcore and distinct. Smitson comments on how she got the look, and her inspirations.

“A lot of different things [inspired me]. Mainly, not giving a damn about anything but being comfortable, I didn’t want to show off my body, as amazing as it is, fans don’t deserve to see that, so I covered up everything but my main weapons, my arms and face, and I’m not afraid to use both.

I don’t feel a need to wear make up and straighten or curl my hair. I wet the hell out of [my hair] and tape my wrists so they don’t get damaged breaking someone’s face, and I go do what I do best with nothing more than my natural looks and aggression.

As for my current look, after debuting for Pro Wrestling Eve’s sister promotion SHEVOLUTION at Stage 1, and beating the hell out of Charlie Morgan (the champ), I decided that maybe it was time to embrace what I already knew. I’m a badass and people should know my name.

When I got into the back, there it was, my leather jacket with my name and a Greek Mythology book right next to it. Fate, you might think, but HELL NO, I don’t believe in fate. It was a coincidence, but what came out of it was knowledge of the badass Greek goddess, that’s where the Valknut, which is the logo I have on my right leg and my ring jacket, came in. I already had the logo on my jacket, but that’s when I truly found out what it meant. The symbol itself signifies many things, but the things that I relate to most were, ‘discipline’, ‘honor’, ‘self reliance’, ‘truth’ and ‘courage’; all things I stick and adhere to.”

Smitson had an impressive run in Charity Wrestling Promotion, where she’s been champ for 365 days, and German Wrestling Federation. The “Villainess” spoke on how lucky the promotions got for signing her.

“It is natural, I’m a natural champ and I feel they are lucky to have me. CWP management didn’t feel I was worthy of a title shot, but thanks to my manager at CWP, James Daniels, I found myself in a triple-threat title match, and I won. Doesn’t matter how, all that matters is I won. And since then, they have thrown every challenge at me they could, surprise opponents, mixed tag matches and NO DQ matches, in hopes of me losing my title somehow. No matter what they’ve tried, I always come out on top. And there’s not a damn thing anyone can do about it.

It’s very rarely that I am impressed by anything, but GWF managed to surprise me. The management knew exactly how important I was, and treated me like a star. Exactly how I deserve to be treated. The only downfall was having to go and wrestle in front of hundreds of ungrateful German [fans].”

Smitson is competing against Alexxis Falcon, Sadie Gibbs and Maddison Miles in a Deeds match, where the winner gets a contract for a match of choice, over the next year. Smitson was asked if she had any idea what that match might be.

“I don’t know and I don’t really give a damn. All I know is that I have not one, but THREE people, to look forward to beating up. I’m not afraid of any of them. NONE of them are good enough to outsmart or out tough me. It’s simple really, I’m gonna eliminate them all, then whoever wins the BEW Women’s Championship Match better be careful. Wether it’s Kat Von Kaige or KC Spinelli, I’m coming for that BEW Women’s Championship. When I do, nobody is going to stop me from having my hand raised in victory.”

Skye Smitson and all the women of British Empire Wrestling can be seen on-demand at the promotion’s website, and at ClickWrestle.

Empire Fights Back 5 will be live at KNK Stadium in Morden, London on Sunday, Dec. 2 at 4 p.m. GMT. Return to Diva Dirt for more interviews, videos, and live action before, during, and after the event.