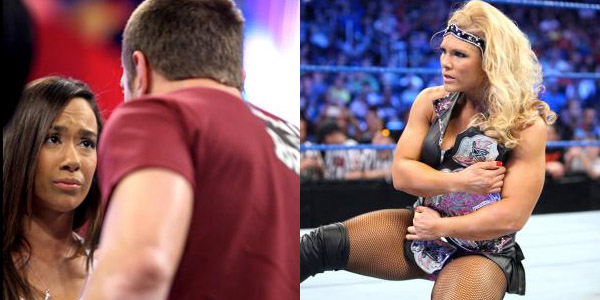 Hello all and welcome to this week’s edition of the SmackDown Redux! After racking up another loss to Maria Menounous at WrestleMania, Divas Champion Beth Phoenix is looking to take out some of her pent up frustration on the Divas roster starting with Nikki Bella. Luckily for Nikki, she has some unexpected support in the form of Kelly Kelly, who makes her way out to the ring to observe this non-title contest:

Out first is Beth Phoenix and she does not look happy in the least. Nikki Bella is out next and notable in her absence is her twin sister Brie, who was given the night off as a reward for her support of Team Johnny at WrestleMania. As Nikki saunters to the ring, the familiar music of Kelly Kelly comes blaring through the arena and I must say, she’s looking great tonight.

Kelly slaps hands with the fans, while Beth gives her the death glare from inside the ring. The official signal for the bell and our Divas match is underway.

Nikki starts off with some jaw-jacking, which was probably not the best idea when you’re facing off against a pissed off Glamazon. Not impressed by Nikki’s verbal prowess, Beth drills her with a clothesline, before going to work with a flurry of strikes on the mat. Before Nikki can make it back to a vertical base, Beth starts choking her out with her knee, drawing a warning from the referee.

Beth whips Nikki across the ring and starts pounding on her again, earning her another warning from the official. Kelly comes down to the ring and voice her disapproval of Beth’s behavior and nearly gets her head taken off by a swipe from the Divas Champion. Beth turns her attention back to Nikki, charging at her in the corner, but Nikki manages to move out of the way in the nick of time and levels the Divas Champion with the Bella Buster to pick up the upset victory.

Well, that was surprising. I thought for sure that this would be a squash match to help rebuild Beth’s credibility after completely blowing it at ‘Mania, but I guess WWE had other plans. Obviously, there’s a feud brewing between Kelly and Beth after the events of the past few weeks and I would not be surprised to see Kelly as the new Divas Champion in the next month or so. In fact, I think I may actually prefer it.

It’s obvious that WWE has no idea what to do with Beth, so why not take the title off of her and build a feud between former best friends Kelly and Eve? Kelly is the quintessential babyface and Eve has really come into her own, both in and out of the ring and I really think that they could have a decent rivalry if given half the chance.

In other Diva news, it looks like there’s (even more) trouble in paradise for the budding power couple of Daniel Bryan and AJ. Check out their segment from last night’s SmackDown below:

Ouch… That was harsh, D-Bry…

Somehow I don’t think the AJ/DB saga is over just yet. I feel like they could do more with these two. Perhaps AJ will seek consolation in the big, pale arms of Sheamus? Or maybe she will play the woman scorned and assure that Daniel never gets hand back on the title? The possibilities are endless.

If this indeed the end of AJ and Daniel Bryan, I must say she did pretty well for herself. She went from jobbing to Beth and Natalya to being connected to the World Heavyweight Champion and becoming a fan favorite. Hopefully, WWE will continue to give her more opportunities to prove herself.