SmackDown Redux (December 14th, 2012): You Can Run, You Can Hide, But You Can’t Escape a Lithuanian Headlock 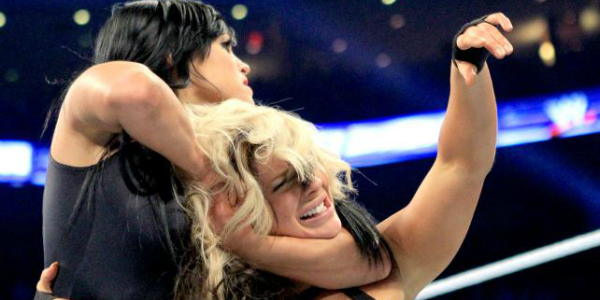 Man it feels like ages since there’s been a SmackDown Redux, but alas, hello to everyone. I am not Steven, for his Internet has been put in a never ending headlock today and thus will not be able to allow him access to write. Never fear though, I am here to encourage you all to pray that Naomi wins the battle royal Sunday… err, I mean, I’m here to write the SmackDown Redux! But the prayers would completely be welcomed, too.

This week, we had Kaitlyn, or as I’ve brilliantly seen her referred to as of late by the hilarious @3ManBooth on Twitter, Kait Possible, taking on the devious and underhanded, Aksana. The video is over four minutes long, which somewhat startles me because normally when I check out the blue branded Diva matches on YouTube, the clip is no more than one or two. Maybe this is good news? Personally, I wish it was a (looks around to make sure Teddy Long isn’t near) tag team match, so that Aksana could fall over the ropes and into the ring while trying to extend her hand out. But after weeks of no action, we will take anything!

We simply just start the video at the sight of Aksana stretching her arms out in preparation to give a certain two tone haired Diva a good ol’ fashion beatdown. As the pink nameplates fade into oblivion, the bell sounds and we kick things off. They lock up, as Kaitlyn backs Aksana into the ropes until she’s forced to break. It’s after that where the moment we’ve all been waiting for begins… Aksana applies the headlock of terror.

Kaitlyn tries to fight it… she tries to overcome it… but there is just nothing you can do once you’re locked in that Lithuanian power hold. In fact, I believe a good three minutes pass by without that damn move being broken. Keep in mind, Aksana does convert it to a chin lock, and beats on Kait Possible’s chest a few times, but a headlock is a headlock and that sucker isn’t going anywhere.

Maybe Aksana is trying to hold Kaitlyn in place so she can snatch the second tone out of Kaitlyn’s hair as a measure of revenge for Maxine? Or maybe she thinks she’s Sheego and is trying to choke Kait Possible out and take her to Dr. Drakken? Yes, these are the things I ponder in my head while watching this choke hold go on longer than most of the Divas actual matches.

Wait! Kaitlyn hits a sidewalk slam! Oh, but Aksana keeps the headlock applied through the move. If Kaitlyn has not yet succombed to this headlock, maybe it’s time to try something else? I swear if I was the referee for this match, I would’ve just dragged Kaitlyn’s foot over to the bottom rope and forced it to be broken. I now think the fans are chanting “Rey Mysterio”, because well why not?

FINALLY! Kaitlyn grabs that Lithuanian choker and hoists her body up onto her shoulder. Aksana hits her in the back and goes for that ungodly move again, but thankfully Kait Possible must have been called or beeped and gotten a sort of power up, as she throws Aksana into the ropes and decks her with a clothesline. A shoulder tackle follows it up, then concluding with a flapjack. Kaitlyn ambushes her in the corner, throws her across the ring, and then goes after her. As Aksana sits on Kaitlyn’s shoulders, I believe I hear the words, “This is for that damn headlock” leave Kaitlyn’s mouth, or maybe that was just the voices in my own head. Whatever the case may be, Kaitlyn drops her with a gutbuster and picks up the victory. Now someone get her honorary Ron Stoppable, Derrick Bateman, and their naked mole rat Rufus… who I’ll leave for you all to guess which superstar that is in the comments.

Also, check out Natalya and Rosa Mendes as they each manage a team for an eight man tag team match featuring Tyson Kidd, Justin Gabriel, Primo, Epico, and those other guys. (Note: sorry Primetime Players, I was on board until the theme changed.)

Thoughts: My God.. that match was interesting to say the least. I normally am not big on critique because I kind of feel weird picking apart people that train and work hard every day, but I just don’t know what happened to Aksana. She had a match with Kaitlyn once in FCW that left me begging for her to be called up, so to see this never ending headlock take place AFTER that FCW one is pretty disappointing. What sucks is that the match actually did get a good amount of time too, but 90% of it was the same exact hold. I’m not sure what happened, but I hope it never gets to happen again. Overall though, the match wasn’t a trainwreck or anything, more so, it was just really weird. I can’t ever recall a Divas match that got time where the same move was held in for over three minutes so at least history has possibly been made!

P.S. Do yourself a favor and check out this match to see what the two ladies can really do: