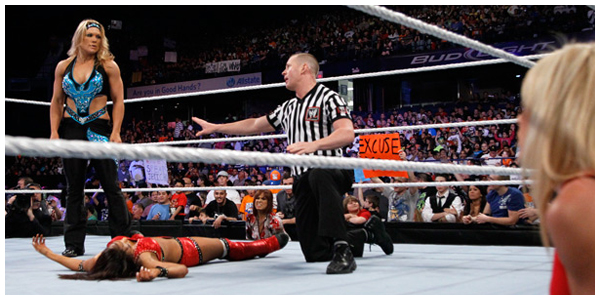 The SmackDown Divas this week were relegated to WWE Superstars for reasons that I can’t quite fathom. For one, the WWE Women’s Champion Michelle McCool has been a huge staple of the show for the past couple of years and also, Vickie Guerrero is another big selling point. Seems odd that they’d move the Divas segment from SmackDown to Superstars when such key players are involved. I guess we needed more time on SmackDown for the dissolution of Cryme Tyme, who coincidentally, spend more time on WWE Superstars than most. Nonetheless, this segment felt exactly like it would on SmackDown — it was given plenty of time and the Divas were given promos which is somewhat unusual for this show. So while I am a little confused as to why it wasn’t on the main show, it works just as well.

This week, the gear was turned up on the whole ‘Glam-a-man’ situation as Simply Flawless, lead by Michelle McCool, made their way down to the ring and out-and-out called Beth Phoenix a man. They had been planting the seeds for this direction prior to WrestleMania with the ‘Glam-a-man?’ t-shirts but as I mentioned last week in the Redux, it looks as though they are pressing ‘restart’ on this feud due to the yearly obstacle that is ‘Mania, which hinders rather than helps the Divas storylines as they have to be put on the show en masse with the Raw Divas also. Watch this week’s segment below:

First up on the mic is the heat magnet herself, Vickie Guerrero who then introduces us to the Women’s Champion, McCool who informs us that Beth Phoenix is a man. Great. More of WWE’s immature ‘potty humour’. The fat jokes with Mickie were just the start I take it. It’s a shame that every Diva feud must boil down to such elementary, vain things such as who’s sexier, who’s fatter, who looks manly etc. It just portrays the Divas as being high school bitches and not the intelligent women we know they are. Michelle McCool is in fact a very intelligent woman and dumbing her down with this character just seems silly to me. I could buy her as being a cold, calculating, meticulous heel who uses her brains instead of her brawn but that would be far too complicated to script apparently. Instead, the Divas must be dumbed down and enforce stereotypes. It’s evident that WWE doesn’t actually believe the Divas are smart as they would like us to believe with their ‘Smart, Sexy & Powerful’ slogan. Anyway, I digress. The acting here is pretty standard fare for Lay-Cool but they do it well, particularly Layla.

Vickie Guerrero announces that as a result of the new information that ‘Beth is a man’ she will have an intergender match against Layla. Out comes a super pissed off Beth Phoenix who avoids her regular entrance and marches to the ring with authority — nice touch. It sells that she’s annoyed and has no time for the happy, smiley Glamazon pose at the top of the ramp.

As Beth enters the ring, Layla tries to back away from her and she dashes out of the ring with a shrill scream. Layla composes herself on the outside and gets back in the ring but when she sees the Glamazon running at her, she once again tries to escape the squared circle but this time is stopped by Beth. The referee tries to keep the two apart and as a result, Layla manages to lay in a kick to Beth’s head and take control. Layla then lays in a few more of her sharp kicks and tries to irish whip Beth but the Glamazon isn’t moved. Beth throws Layla into the ropes and bends over for an overhead toss but Layla holds onto the ropes and kicks Beth in the head again.

Layla realises that her quick thinking has just pissed off the Glamazon even more and lets out yet another shrill scream as Beth hits her with a double axe-handle. Beth then grabs Layla by the neck and lifts her off the ground as Layla screams ‘Noooo’. Beth rests Layla on the top turnbuckle and then throws her off with Layla landing on her back. Beth then grabs Layla by the legs but she tries to counter by holding onto the ropes resulting in Beth slamming her onto the canvas. Beth then screams at Layla to call her a man to her face, meanwhile from the outside of the ring, the Women’s Champ tries to interfere and grabs Beth’s leg. Beth jumps out of the ring and Michelle and Vickie hightail it. Beth chases Vickie, who stumbles but Beth is forced back into the ring by the referee. As Beth gets up on the apron she is hit with a great low dropkick by Layla. Beth eventually gets back into the ring but Layla begins choking her over the bottom rope with her foot. Layla then jumps on Beth’s back, choking her before Beth mounts a comeback and backs into the turnbuckles wriggling free of Layla.

Beth walks into a back elbow from Layla who then climbs the turnbuckles and goes for a double axe-handle but is caught by Beth who hits her with a side back breaker and then picks her up for the Glam Slam. Layla, again, sells it like a pro as Beth takes the win.

After the match, Michelle attacks Beth from behind with a distraction from Vickie but Beth soon overpowers her. Simply Flawless hightail it out of the arena after only aggravating Beth some more.

I think I’ve lost count with the amount of times a match has ended with Beth hitting the Glam Slam on Layla for the pin. I’m sure I’ve seen it at least three times in the past month or so. This was effectively a squash match for Beth, though I really think they should have tried something different here. Perhaps give Layla a [much desired] win by having McCool and Vickie interefere more and cost Beth the match. Yes, we’re building up Beth for a title match but you’ve already had the same finish many a time. Why not mix it up and tease tension between McCool and Beth by having the champion cost her the win? I guess they did have that interaction between Beth and Michelle after the match which also worked to a degree.

As for the work, solid match as always from these two. I say it nearly every week, Layla has some of the sharpest kicks I’ve ever seen and really does look [in sing-song voice] flaw-less. She has blossomed into a fantastic worker, I’d just really like to see what she can do in the ring though against someone like Tiffany. When you put her against a Beth, Melina or Mickie, it’s usually a very one-sided affair with Layla losing. I’d like to see her against someone who isn’t a top Diva so we can see just how improved Layla may or may not be. I’d hazard to guess that having worked with the aforementioned three Divas for the better part of a year, if you put her in a match with a lesser-skilled Diva, she will shine on her own accord. Working with Beth etc. is becoming too ‘safe’ for Layla, put her in the ring with one of the lesser-skilled girls and let’s see just how much she has improved. I think now compared to last year versus Eve, we will see a world of difference. The only way to build new stars is to give them an opportunity, they’ve been using Layla in this enhancement role for a while now — give her a chance to break out. She’s already got the character and I think given the chance to show more offense etc., she could show that she has the wrestling ability too. And if she can show that, then there’s no reason to not push her and give her storylines and feuds of her own, maybe even have her go after the Women’s Championship. WWE just hasn’t given her the opportunity yet because they keep putting her in an enhancement role. I feel Layla could be the next top Diva if given the chance.

Last week I asked WWE to build more storyline between Beth and Michelle and well, I can’t deny they did that. Am I thrilled about the storyline direction they went in? No but at least I got what I asked for. The whole Manazon/Glam-a-man thing is obviously akin to ‘Piggie James’ and will likely be Simply Flawless’ signature taunt for whoever they feud with for years to come [if they last that long]. As mentioned in my tangent earlier — it is elementary, it does paint the Divas as being shallow and all about looks, sex appeal etc. but WWE has always been stuck in that gear and that will likely never change which sucks. Yeah, Beth’ll probably overcome the adversity just like Mickie did and perhaps win the Women’s Title but I question whether we need to go down this low-brow route in the first place. When I see stuff like this it makes me wonder whether the Creative Team is so elementary in their thinking that they sit around jesting one another to pull their finger…