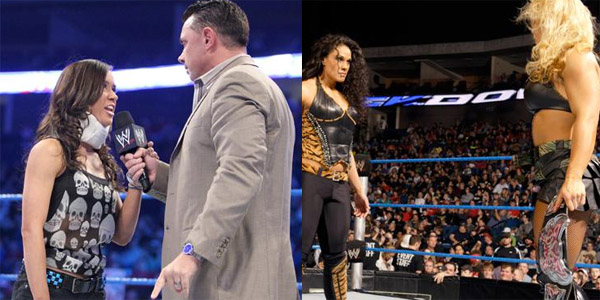 With the Divas Champion coming to visit, AJ confronting Michael Cole, and the latest in the Natalya flatulence saga, there was plenty of Diva involvement on this week’s SmackDown. Other than the Natalya segment, it was pretty much the best night of Divas action in quite a while, so let’s review!

First up, it’s match time as the Glamazon Beth Phoenix makes a rare jaunt to SmackDown to face Alicia Fox, hoping to avenge her loss last year on Raw. Beth is out first, giving the SmackDown audience the opportunity to bask in her glory as she holds the Divas Championship proudly and highly. Out next is the Foxy One in her fanciest of hoods. As Foxy finishes shaking her hips and enters the ring, the bell rings — but instead of taking the fight to her opponent, the Divas Champion has other ideas.

The Glamazon holds the middle rope down allowing Alicia the opportunity to get out of her ring. When Alicia doesn’t bite, Beth squares up to Foxy and gets in her face. Beth tries to overpower Alicia and send her into the corner, but the red haired Diva manages to counter and into the turnbuckles goes the champ. Alicia hits Beth with forearms before trying to go for a monkey flip, but Beth uses her strength to her advantage, not budging and instead shoves Alicia to the mat.

Beth begins stomping Alicia and picks her up to her feet by the hair, but Alicia soon fights back with a kick to the stomach and forearm shots. Alicia goes for an Irish whip attempt but Beth reverses, Fox telegraphs this and manages to hop onto the middle turnbuckle and goes for a back elbow but the Glamazon grabs her. Beth goes for a back suplex but Alicia manages to squirrel her way out of it and lands firmly on her feet. Beth with a clothesline attempt but Foxy uses her limber body to hit the Trish Stratus-like matrix move, but as she gets back to a vertical base, Beth hits her with a double axe handle across the chest.

With no more tricks up her sleeve, Alicia is caught in Beth’s Glam Slam web. Beth hoists Alicia into the air and brings her down hard against the mat. Perhaps one of my favorite Glam Slams. Alicia really took it well!

Beth scores the victory, but she isn’t done. Beth tries to go for a second Glam Slam but not so fast! Tamina‘s music hits as she comes out to make the save. Beth drops Alicia and allows her to wriggle out of the ring. Meanwhile, Beth and Tamina stare into each other’s eyes, both smiling, as if to say that they realize they can bring the fight to one another. With eyes locked for a good minute or so, it’s clear that these two will eventually meet for the Divas Title. Beth seems to be clutching the belt as she leaves the ring and retreats up the ramp, perhaps realizing that Tamina will be a hard challenge. Tamina, however, continues to look on with an infectious smile, perhaps feeling as though she has Beth’s number.

Thoughts: Despite being 1-2 minutes, I really enjoyed the match between Alicia and Beth. There was plenty of action that made use of the short amount of time and hey, if you’re only going to get two minutes at most, may as well make it an entertaining two minutes, right? I thought the chemistry was great and Alicia showed some agility and speed which offset Beth’s power. Good stuff. As I said above, I really loved the Glam Slam also. I think perhaps because Alicia has those long limbs, when she came crashing down, it almost looked picturesque. Good match, I thought.

As for the staredown, I have one word: Amazing! I feel like this is a good starting point for Beth and Tamina, and I particularly like the fact that Tamina is this confident babyface who knows she can match Beth in size and strength, whereas Beth has always had an advantage over Divas like Kelly Kelly. I’m also loving the evolution of Beth’s character lately with the, “Get out of my ring!” gimmick and her outcry for competition. The smirk towards Tamina because she’s finally being given some competition was really well done. It adds more intrigue than just the usual heel shtick with the champion trying to avoid the challenger so they don’t get beaten up.

If that match and post-match staredown were the main course, AJ and Michael Cole of all people gave us dessert.

During an ‘interview’, things quickly disintegrated as the bane of all of our existences, Michael Cole, began running down AJ like it’s NXT Season 3. However, thankfully, this is SmackDown… and on SmackDown, AJ gets to fight back!

Cutting a promo like her life depended on it, AJ told Michael Cole that he was a “biased, obnoxious jerk”. She even stands up for the Divas division, calling Cole out on his commentary mocking her, Daniel Bryan and the Divas. Four for you, AJ Coco!

Thoughts: It’s like Christmas in the Divas division. First Tamina gets to talk and show some personality earlier in the week, and now AJ too? Great promo by AJ and I like the fact that the Divas division was not forgotten. Hopefully AJ’s pairing with Daniel Bryan and promos such as this one will allow her to get over more. Fingers crossed that she can then be re-integrated into the Divas division and get something of a push. Go, AJ!

We also got to see the latest Natalya backstage segment, which this week featured Natalya’s Hart Dynasty pal, Tyson Kidd, and the punchline was delivered by Hornswoggle. (Apparently Santino was busy this week.)

Excluding that segment, I was thoroughly entertained with SmackDown this week. In the words of Kelly Rowland: “AJ, girl, you put it DOWN!”