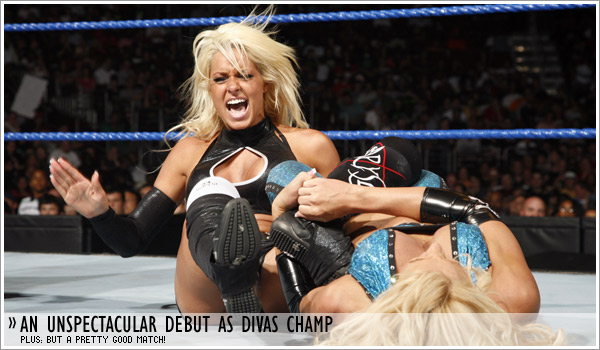 I apologise for the belated SmackDown Redux, but this weekend just happened to be the most sweltering hot weekend we’ve had in the UK this year, needless to say I didn’t really feel like parking up at the computer much!

Thoughts & Reactions
So after all the hype and anticipation, we crowned the new Divas Champion – except, it was pretty much an afterthought on SmackDown. It seemed like business as usual for the women’s division, Michelle makes quick work of her opponent and that’s your lot. I was expecting way more fanfare than we received, I thought a crowning ceremony of some sort would be a nice touch but nope. In my brain I had concocted the whole scenario, Michelle has a crowning ceremony only to be interrupted by Natalya – setting up a rematch between the two. Instead, no sign of Natalya. An unspectacular start to Michelle’s run as Divas Champion.

Now, I may sound like I’m dissing – well I kinda am, but I’m also not: I really enjoyed the Divas match on SmackDown and felt these two worked really well together. Maryse, who was by all accounts, useless for the better part of two years has impressed many of us a lot in the past few months. She had a really good week, a gorgeous photoshoot coinciding with a good match-up even though she ultimately lost. What a difference a few months can make! Up until April, Maryse was catching checks for nothing and now, she’s actually proven to be quite the asset for the SmackDown roster. Michelle too, was great, it really shows her evolution as a wrestler as she’s now able to carry less experienced Divas through a match as opposed to being the one being led.

Back to the match, some good work and some sloppiness. Taking the action to the outside always gets some kudos points from me, it’s something we don’t really see with the Divas but have done quite a fair bit on SmackDown this year. Maryse throwing Michelle into the ring apron showed some aggressiveness on her part and that’s always a good thing. Things got a little sloppier for the finish however, was there supposed to be something spectacular about Michelle’s backflip – was she meant to elbow Maryse or something? It looked a little odd that both Divas were just standing there and then the roll into the heel hook felt uncomfortable.

Match Rating: PASS / FAIL
Comments: Ultimately, a fine match that we can overlook the sloppy spots.

Also on the broadcast, we found out that Maria is finally coming to SmackDown next week. I’ve read reports that WWE wants to make Maria’s debut a big deal and I think they’re going the right way about it. I like that they kept her debut until after the Divas Championship match at the Bash. How will they introduce Maria? It’ll be interesting! A few possible scenarios could be having her get involved with Victoria, like I have hoped for on the site for the past few weeks! Or they could even have Vickie introduce Maria as an opponent to punish Alicia Fox, that way we gain two wrestlers! I’m not sure how Maria will fit into SmackDown, because both Raw and SmackDown right now are really about Divas who can wrestle on a regular basis and put on good matches – that’s something we haven’t seen Maria do. Maria hasn’t really ever been in a regular wrestling role, so I think it will be a shellshock when she’s on the show with all the girls. Sure she’s a big name, but I take Maryse as an example – in three months she’s become a wrestler. It’ll be hard for WWE to push Maria as a wrestler but I hope they can do it. Maria adds some name value to the SmackDown women’s division and could definitely share the top Diva role with Michelle.

The In-Between: Maryse and Michelle.