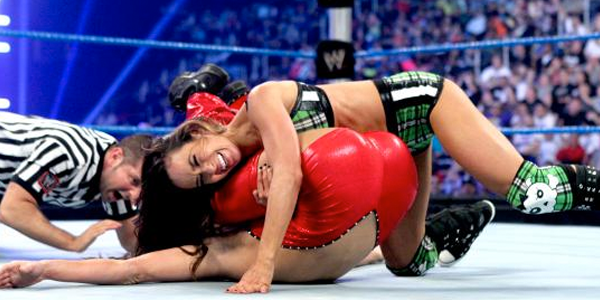 Welcome one and all to this week’s SmackDown Redux. Big thanks to Diva Dirt’s #1 Husky Harris fan, Bobby, for covering me during my brief hiatus. There was a lot of Diva action this week on the blue brand, so let’s get right into it, shall we?

In case you’ve missed the memo, Daniel Bryan is the reigning World Heavyweight Champion. So it’s only fitting that his lady friend AJ has some gold around her waist as well. Therefore, Bryan has decided to coach AJ to a shot at the Divas Championship. The first stop on the AJ Divas Championship World Tour? The Bella Twins.

Daniel managed to help AJ avoid Twin Magic and pick up a win over Nikki Bella on last week’s edition of SmackDown, but can he do it again this week against Brie Bella or will AJ fall victim to the’Bella switcheroo? Check out the match below:

We start things off with Daniel and AJ already in the ring, discussing strategy. When Lilian announces AJ’s name, she gets a pretty decent pop and her face lights up. Daniel on the other hand, not impressed.

Next out are Brie and Nikki and we’re treated to a backstage promo of the two as they strut to the ring. Nikki tries to give Brie some helpful advice, but Brie shuts her down and tells her that she’ll show her how to get the job done. Could there be some dissension in the Bella ranks? Probably not…

After AJ lays a big kiss on Daniel Bryan, the official signals for the bell and our Divas match is underway!

Brie and AJ start off with a simple lock up, but Brie gets the upperhand and cinches in a headlock. AJ tries to wriggle free, but Brie slams her down to the mat, using a handful of hair. Flustered, AJ scrambles to the other side of ring to receive some counsel from her coach, before going back into the fray.

AJ goes for the lock up once again, but Brie takes out her knee and slaps on another headlock. AJ manages to fight her way out with a couple of forearms to the gut, before leveling Brie with a flying back elbow, which sends DB into a frenzy at ringside. AJ tries to keep the pressure on her opponent, but Brie sees her coming and sends her flying into the the top rope, putting her back in the driver’s seat.

Brie stomps on AJ for a bit, before going for a pinfall, but only gets a two count. Frustrated, Brie starts smashing AJ’s head into the canvas. After being reprimanded by the referee, Brie goes for a knuckle lock pin, but AJ kicks out. Brie freaks out on referee, giving AJ the opportunity she needs for a sneaky roll up, but Brie kicks out at two.

Before AJ can get her wits about her, Brie takes her down with a vicious clothesline and locks in a seated abdominal stretch, looking for the submission victory. AJ squirms free once again and starts firing on Brie with a flurry of strikes, followed by a modified Fujiwara Arm-bar.

Brie calls out for Nikki, who hops up on the apron to distract the official, but Daniel cuts her off at the pass. While the referee tries to deal with Daniel and Nikki, AJ has released the submission, leaving her back turned to Brie. Brie tries to sneak up behind AJ, but AJ moves and she goes flying into Nikki. While Brie is still stunned, AJ rolls her up to pick up the victory.

I gotta say, this was a pretty good match up. AJ is just born to play the underdog and if she ever does get her shot at the title, she would play the perfect small fry, babyface underdog to Beth Phoenix‘s powerhouse heel. If AJ can keep racking up these wins, maybe she could be the next in line for a Divas Championship match.

Post-match, Nikki and Brie put in their two cents in the Team Teddy/Team Johnny debate:

If that wasn’t enough AJ and D-Bryan for you, they also opened the show with a promo segment. Watch below:

Last, but certainly not least, Eve uses her feminine wiles to tug on poor Zack Ryder’s heartstrings once again:

Not the best Zack/Eve segment we’ve seen, but it’ll do. Say what you will about how sexist this storyline is, but I think it’s the best thing that could have ever happened to Eve. She was in major need of a character overhaul and she’s taken the ball and ran with it. She even has a match at WrestleMania this year, so I say more power to her. I would have liked to see some more development of the Divas WrestleMania match, since there was none at all on Raw, but I’m sure we’ll get something on Raw next week.