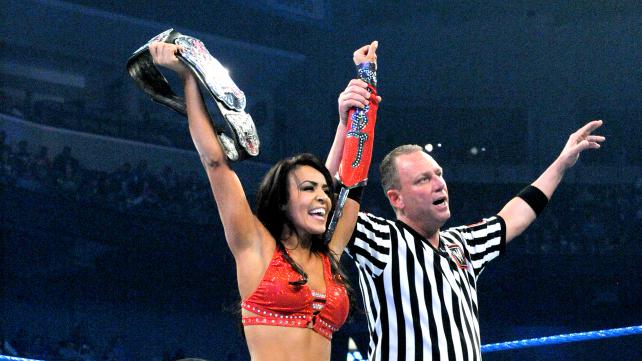 Happy Cinco de Mayo guys, and welcome to this week’s edition of the SmackDown Redux! This week, the new Divas Champion, Layla returns to the blue brand to take on the First Lady of The Hart Dynasty, Natalya in singles competition. But first, let’s get our weekly dose of drama in the form of another AJ and Kaitlyn backstage segment. Can the Chickbusters mend their relationship after the events of last week’s SmackDown or will the former best friends be at each others’ throats? Check out the segment below:

We start off with Kaitlyn chatting with Alicia Fox in the back and I can only assume they’re talking about the epic JTG makeover that is going to be unveiled on next week’s NXT. But before we can eavesdrop on their conversation, AJ creeps into the frame, looking apologetic and dejected. Alicia quickly makes her exit, leaving Kaitlyn and AJ alone to work out their differences.

AJ apologizes for last week, saying it wasn’t the real AJ who slapped the holy hell out of her last week. Kaitlyn accepts and tells AJ that her pity party over Daniel Bryan has got to stop. AJ takes a second to process that and hauls off and slaps Kaitlyn once again, giving off shades of that epic Cherry/Maryse slap from so many years ago. While Kaitlyn lays on the floor in shock, AJ rushes off to end the segment.

I must say, I’m really enjoying where this AJ/Kaitlyn storyline is going. Both have improved considerably since their NXT3 days and I think they can put together a decent program, if given the chance. I think AJ has really broken out since the beginning of her storyline with Daniel Bryan and Kaitlyn has made a name for herself on NXT and this budding rivalry may be just what they both need to finally make a dent in the Divas division.

Next up, Layla makes her return to SmackDown to take on another former Divas’ Champion in Natalya. Will the British beauty continue to turn heads or will she fall victim to the Pink and Black attack? Check out the match below:

We start things off with Layla making her entrance to what sounds like a pretty decent reaction from the crowd. While plays up to the fans, Natalya awaits her in the ring with a smug grin on her face. After a quick replay of the events of Extreme Rules, the official signals for the bell and this non-title match is underway.

Layla and Nattie kick the match off with am impressive exchange of chain wrestling, which ended in a stalemate. The Divas lock up again, and they go into another display of their technical wrestling skills, but Natalya cuts it short with a stiff forearm shot and a vicious discus clothesline to gain control of the match. Natalya goes for the pin, but only gets a two count.

Natalya pulls Layla to her feet and lock her into a abdominal stretch, looking to wear out the champion. Layla quickly fights her way out of the hold, but is immediately scooped up by Nattie. Layla wiggles out of danger once again and comes charging across and uses a slick lucha-style rollup to get a nearfall of her own. Natalya kicks out at one, but before she can collect herself, Layla hits her with the LayOut to pick up the victory.

Even though it was short, I really liked this match. You can tell that Layla has really been working on her in-ring skills before she return, as she’s lot more fluid and capable in the ring than I remember. I fully expect this tear that Layla has been on since her return to go on for at least another week or two, before it’s time to establish a contender for the title. Perhaps we’ll see Beth return to challenge Layla, or maybe even Kharma, whose return has had Diva fans abuzz for months. In any case, I’m fine with Layla building herself up as a competent and credible champ for the few weeks.