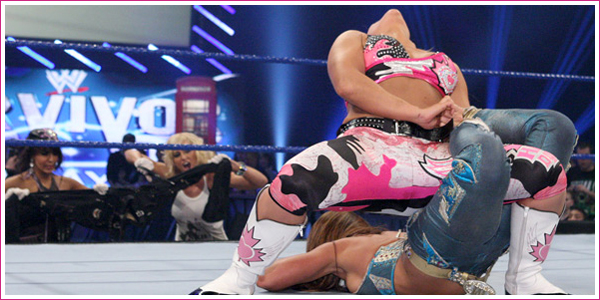 Friday the 13th may be considered an ‘unlucky’ day but mark the date in your diaries folks, because this Friday the 13th brings good luck to the Divas and their fans alike. On paper, Mickie James vs Natalya is a dream match waiting to happen and this week, the dream match became a reality…

Just moments prior to this match, we see Layla approach Mickie backstage in another badly-acted backstage segment. While Layla distracts Mickie, this allows Michelle McCool to sneak into Mickie’s lockerroom because otherwise that close-up of Mickie’s dressing room door will have been for nothing. Mickie once again calls Layla ‘Scary Spice’ in a lame attempt at humour. Note to WWE: It’s not going to catch on.

Anyway, with the rising tension set, it’s time for all to boil over, in where else, but the ring. Mickie gets a full entrance while Natalya has to make do with a Beth-jobber-sized ‘announcement’. Rude.

Easily two of the best wrestlers on the Divas roster, we finally get to the wrestling bit as the bell rings and Natalya takes down Mickie by her legs and then begins slapping her around the head. Nothing pretty about Natalya’s style, as has been much noted, but it’s fun to watch and breaks from the Diva norm. Natalya then gets to her feet and looks rather like ODB as she taunts her opponent. She goes for a clothesline but Mickie counters into a snapmare and a beautiful low dropkick which stuns the powerhouse third-gen Diva. Natalya scatters from the ring in true heel fashion crying, “You back her up!”

Mickie, taking no nonsense, goes for a baseball slide but Natalya moves out of the way and shoves Mickie into the steel steps. When was the last time the steps came into play in a Divas match? And no, Melina tripping on them doesn’t count. This was a nice display of physicality from Natalya, it’s rare to see the harsh steel steps used in Divas matches but it fits with Natalya’s rough-house style. Mickie sells the spot well as Nattie takes the lead and throws Mickie back in the ring and capitalises on hurting Mickie with a quick pin fall.

Natalya grabs Mickie by the hair and slams her straight back onto the mat, before locking Mickie into her patented surfboard submission move. With Natalya’s shoulders down, the referee begins the three-count in Mickie’s favour but Nattie breaks the hold, causing her to fall smack-flat on her face. Great spot here.

The Hart Dynasty Diva follows up with forearms and stomps Mickie in the corner with no relent. In a very nice Melina-esque spot, Natalya attempts to force Mickie out of the corner by her legs, Mickie holds onto the ropes with her arms and ends up jumping to her feet and comes at her with forearms. Natalya then comes back with a forearm of her own, then shoves Mickie into aforementioned corner and lays in knee strikes to Mickie’s body. Mickie manages to hit her patented hurricanrana from the corner and then gains momentum with clotheslines, Natalya then comes back and somehow Mickie ends up jumping through the bottom rope. O… kay…

Natalya runs at Mickie on the apron, Mickie with a shoulder block and goes up top, the two Divas then trade blows. All of a sudden we cut to Layla and McCool coming down to the ring with a few choice garments from Mickie’s lockerroom. In the ring, Mickie hits a Thesz Press from the top and goes for a cover but Natalya kicks out. Mickie becomes distracted by Layla & Michelle, who [wearing gloves, by the way] cut into Mickie’s purple wrestling top.

In the ring, Natalya takes advantage with a clothesline from behind and locks in her finisher, the Sharpshooter and Mickie eventually taps out. Meanwhile, Layla & Michelle are now cutting into Mickie’s pants. Mickie, who seems to be emotionally invested in her clothes, is visibly in tears. I know clothes can hold a sentimental value but this just came across silly. Wouldn’t you expect her to jump out of the ring and chase them? Not watch on in a flood of tears like they’ve run over her cat.

The match itself was very solid and featured great work from both Divas; it was hard hitting, it was at times rough and thoroughly enjoyable. It’s a shame that the fans in attendance weren’t more into it, which is unusual for UK crowds who pretty much cheer the whole show. The commentary also, was rather bland and monotonous for the most part and added little to the match. Perhaps those two factors could have helped a little more but other than that, I thought this was a great match and both Divas did a great job. I can’t help but feel that with more time and perhaps a little less restriction, it could’ve been even better. This came across as just 25% of what they can do and hopefully one day we’ll see them go all out.

Next up, the Glamazon Squash Tour stops by Britain:

Beth Phoenix has been the focus of a remake if you will. Hopefully not a crappy remake like the new ‘Fame’ but a proper good remake like err… yeah, maybe not the best analogy. Anyway, Beth’s Squash Tour stopped by Sheffield where she was met with a young lady named Lisa Taylor, who unlike her opponents in previous weeks, seemed to have a little more meat on her bones and seemed to match Beth physique-wise:

A confident young thing, isn’t she? Taylor goes for a rollup straight away on the Glamazon, who unflinchingly doesn’t seem to be moving one bit. Instead she grabs Taylor by the hair and grabs her in a headlock and hits her with an elbow to the head. This is then followed by clubbing blows with her forearm across the top of Lisa’s head. And by now, she’s probably seeing those cartoon birds around her head.

Beth then picks up Taylor in a powerslam position and drives her shoulder into her knee. She then runs at the turnbuckle, Lisa in tow, hanging her up in the tree of woe. The unrelenting Glamazon sets up a devastating neckbreaker which is delivered greatly enough to make the viewer feel uneasy. And with that it’s safe to say Taylor’s brush with fame has come to a halt as Beth hits her with another of her stalling Glam Slams, flaunting her prey for all to see, before hitting the move.

Another squash match for Beth, who in just over a week, is guaranteed to see some better competition at the Survivor Series. With three weeks of these matches now and a pay per view to build for, you’ve got to give Beth something a little more substantial to do next week that could bring her into the main fold of Divas action. However, my gut tells me they’ll probably have another squash match next week, then the pay per view and after that, maybe then we’ll see some development.