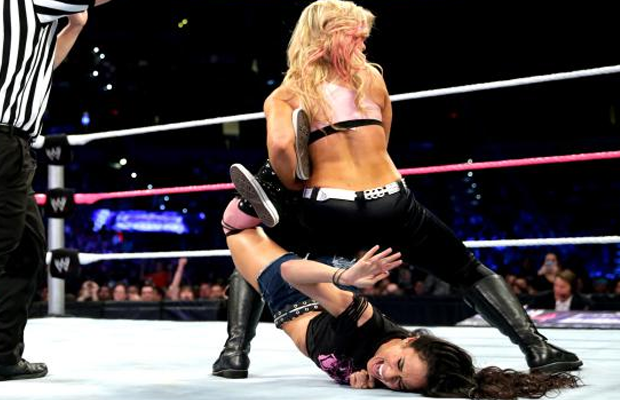 Hello everyone and welcome to this week’s SmackDown Redux! This week on the new brand, Total Divas Natalya, Brie and Nikki Bella team up to take on Divas Champion AJ Lee, Tamina Snuka and Alicia Fox in a Six-Diva Tag Team match. Can AJ (and Co.) keep the momentum coming out of her title defense at Hell in a Cell, or will Team Total Divas pick up a win going into their return? Check out the match below:

We kick things off with the babyfaces already in the ring. Team AJ is out next and their gear is color-coordinated (Take note, Team Bella). The official signals for the bell and our match is underway, with Alicia and Nikki starting for their respective teams.

The Divas start off with a lockup, but Alicia gets the upper hand, sending Nikki crashing to the mat. Alicia picks Nikki up and whips her across the ring,  but Nikki strikes back with an elbow to the face and a bulldog for a nearfall. With her opponent reeling, Nikki whips her into the corner and levels Alicia with a monkey flip/clothesline combination, with an assist from Brie.

Brie tries to maintain her momentum, Alicia gets the jump on her and slaps on a side headlock, looking to wear her down. Brie fights her way out with a hip toss, but misses the blind tag made by Tamina and gets turned inside out by a brutal lariat.

Now in control, Tamina lays Brie out with a suplex for a nearfall, before tagging AJ, who goes to work with a guillotine choke. With a bit of encouragement from the audience, Brie manages to fight her way out of the submission, only to find herself in ANOTHER guillotine choke.

This time Brie rams AJ into the turnbuckle to escape and quickly tags Natalya, who comes in like a house on fire. Natalya takes it to AJ, with a flurry of offense, but Alicia gets involved when she guys for the pin… and then all hell breaks loose.

When the smoke clears, AJ sneaks up behind Natalya and rolls her up for a two count. Unfortunately for AJ, she gets distracted by what is happening on the outside and falls victim to the Sharpshooter, losing the match for her team.

Thoughts: Looks as if Natalya may be next in line for a shot at the Divas Champion, huh? It would make sense, seeing as Total Divas is returning soon. And with Brie getting slowly integrated into Daniel Bryan’s storyline with The Authority, Natalya is the only logical choice.

I feel that WWE will finally pull the trigger and have AJ drop her title to Natalya, but in probably won’t happen until the season finale if Total Divas draws near, so don’t expect it at the next PPV.

That’s all there is this week, kiddies! Until next time!