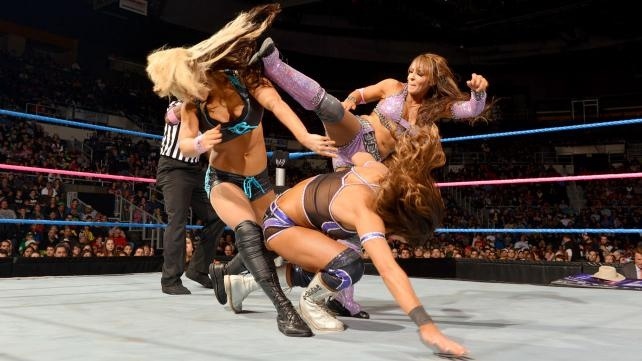 Hello everyone, and welcome to this week’s edition of the SmackDown Redux! Now that some light has been shed on the “Who attacked Kaitlyn?” mystery on Monday night’s Raw, top contenders Kaitlyn and Layla have a meeting backstage with Booker T and Teddy Long about the attack. Not to be outdone, Divas Champion Eve Torres also takes part, along with Aksana. We even get an announcement for a Divas match at the Hell in a Cell PPV, as well as a tag team match for later in the night. Check out the segment below:

Now on to the match!:

We kick things off with Layla and Kaitlyn already in the ring. Eve and Aksana come out next, as the faces mock them from the ring. After some bickering, the official signals for the bell and the match is underway, with Aksana and Layla starting for their respective teams.

The Divas start off with a lockup and Aksana managed to get the best of Layla, muscling her to the ropes. The referee makes her break the hold, but Aksana surprises Layla with a knee to the gut. Aksana whips the former Divas champ off of the ropes, but Layla counters with her signature cradle pin, followed by a jackknife pin for two quick nearfalls. Before Aksana can regain her composure, Layla drags her to the corner and tags in Kaitlyn. Before jumping out of the ring, Layla hits a springboard crossbody, followed by a stiff shoulder block from Kaitlyn. While Aksana is reeling, Kaitlyn rolls her up for another nearfall.

Kaitlyn drills Aksana with a backbreaker, before attacking Eve, who was taunting her from the ring apron. Aksana takes advantage of the distraction and hits a flying clothesline, taking Kaitlyn off of her feet. Aksana gives Kaitlyn a few kicks while she’s down, and tags in Eve, who lands a snapmere/kick combo for a one count. Eve drags Kaitlyn to her feet and chokes her over the middle rope, before going for a running senton. Unfortunately for Eve, Kaitlyn gets her knees up, sending Eve to the mat.

Kaitlyn struggles to get to her corner, but Eve quickly stops her progress. Eve tries to take control of the match once again, but Kaitlyn rolls her up for another nearfall. Before Eve can go back on the offensive, Kaitlyn goes on a tear, laying out Eve and Aksana with elbows and clotheslines. Kaitlyn attempts to hold Eve in place for Layla’s roundhouse kick, but Eve evades and Layla nails Kaitlyn instead.

While Layla is in shock over taking out her partner, Eve pushes her out of the ring and pins Kaitlyn to pick up the win for her team. Post-match, there’s some tension between Layla and Kaitlyn over the ending of the match.

Thoughts: Let’s start with the segment; I thought it was really well done. I can’t remember the last time WWE put this much effort into a storyline, just for the Divas.

As for the match, I thought it was a very good setup for the triple threat match at Hell in a Cell. All the women did pretty well, and there weren’t very many botches. The ending of the match really drives home the every-woman-for-herself feel of the match and the fact the Divas can’t really trust anyone, including their tag team partners. I wouldn’t be surprised to see Eve walk out of Hell in a Cell still Divas Champion, after the Layla/Kaitlyn partnership explodes.