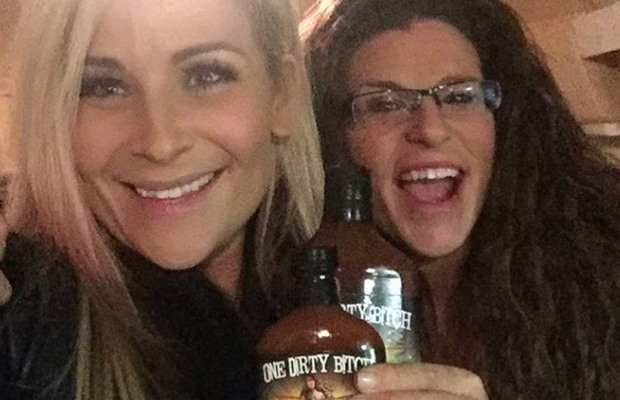 Now, THAT is what I call a red carpet look! Nikki Bella joined the E! panel at this year’s Golden Globe awards and she came prepared. The longest reigning Divas Champion appropriately wore gold and stunned at the Hollywood event:

Summer Rae recently filmed a commercial for Truth, the anti-smoking organization. Summer shared a behind the scenes shot of her getting glammed up for the powerful campaign:

On set of the @truthorange #finishIT commercial! Really looking forward to this coming out as it's something I truly stand behind. Let's end smoking once & for all! #truthorange

Total Divas returns next week on E!, and the show’s official Twitter account shared a video of Alicia Fox hyping the return of the show. Looks like she’s letting a little bit of her crazy back out. Yes, please!

Work it! Former Divas Champion and founder of Celestial Bodiez Kaitlyn is posing for Iron Man magazine once again. The stunning bodybuilder shared some behind the scenes footage of her upcoming shoot:

Natalya sure has a lot of pro wrestling friends. The Diva paid a visit to former TNA Knockout ODB at her trailer this week. Hey Nattie, how about bringing us some of that BBQ sauce you’re talking about? Sounds delish!

Oh hello, ODB! Thanks for having me in your airstream tonight! I'm gonna make the best bbq chicken for myself, TJ our cats with your bbq & hot sauce. AMAZING! ? @theodbbam #Lafayette

We’ve seen many of her impressive gym workouts before but this one definitely caught our eye. Stephanie McMahon shared a photo of herself in the gym and hinted about getting in shape for WrestleMania. Hmm…

The first-ever NXT Awards aired this week and Bayley vs. Sasha Banks at NXT TakeOver: Brooklyn took home the award for Match of the Year. Bayley shared a pic with both award winners posing with Triple H, William Regal and the coveted trophy:

??Thank you all. "Remember yourself as a little girl, she is counting on you to protect her" –@SashaBanksWWE #WWENXT pic.twitter.com/YNkP9N7oVo

WWE kicked off its tour of India this week and shared a pic of the Divas Champion shopping for saris and jewelry to accessorize her belt with in New Dehli. Looking like a champ, Charlotte!

Charlotte also experienced another part of India’s culture when she took a few swings with a cricket bat. The life-long athlete may not be a cricket star yet, but give her some time:

Brie Bella celebrated an Instagram milestone this week, surpassing 3 million followers. She and her husband Daniel Bryan posted a celebratory photo. Hopefully she didn’t do the same thing when she passed the 1 million follower mark…