Welcome everyone to another fabulous edition of the Southern Belle Smack proudly sponsored by… err hang on. This isn’t audio, is it? This is a column, blog, whatever you want to call it and it just so happens that this is the second edition of Diva Dirt‘s Southern Belle Smack. It’s been so long since I’ve written one of these that I don’t even remember what the first one was about. NXT perhaps? If that’s true then the last (and only) SBS appeared about ten weeks ago. Yikes. So much for weekly/bi-weekly feature, eh?

Notice how I threw in a little Canadian lingo there? 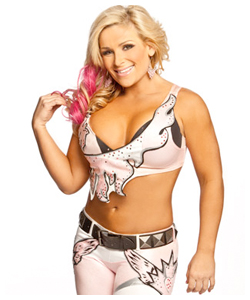 A Canadian is the subject of this blog today and that woman just happens to be competing in Miami tonight at the WWE Fall classic known as Survivor Series. Natalya, our Canadian subject in case you’ve already tuned out, will have a third crack at the Divas Championship when she steps inside the ring to face Lay-Cool in a 2-on-1 handicap match. There’s an old saying that seems fitting for tonight: the third time’s the charm. All signs would certainly indicate that Natalya is poised to walk out of the American Airlines Arena as the newly crowned queen of the WWE.

If anyone deserves this accolade, it’s the third generation Diva. She’s arguably the most skilled girl they have on the roster and she’s one of the best in the world. That alone should make her a shoo-in to become champ and I believe in my heart that she will finally get her first taste of WWE purple gold tonight. But my head… well that’s another story. My head sees Natalya losing tonight. Once again she’ll find herself robbed of championship glory and this time she will be out of chances.

And you know what? I’m fine with that. In my humble opinion, Natalya shouldn’t be Divas Champion.

I can see the stunned looks now; the dropped jaws, the narrowed eyes, the middle fingers being waved at the computer screens. I’m sure several people are closing their browsers right now, refusing to read another word of this fantastic piece of writing! Outside it’s pouring down rain. The thunder is booming. The lightning is popping. South Africa’s finest export Justin Gabriel is being deported. Armageddon is about to happen. I’m sure that’s how people are reacting right now to one little statement. That kind of makes me laugh and for those three people who are probably still reading this and are more curious than angry, allow me to offer an explanation for my statement. After all, I would never make such a bold claim without having some type of argument to back it up.

‘Diva wrestling’ should really be recognized as it’s own brand because lets face it, there’s a huge difference in the product we see on television and the product we see on SHIMMER, WSU, and on other independent shows. The WWE more or less focuses on models that they’ve trained to wrestle their way and sometimes they give them matches against the actual wrestlers they’ve hired. I personally don’t have a problem with this. The WWE is what it is and we can only hope that someday they will take us back to the golden era. Once upon a time, female wrestling in the ‘E did matter. But that was then and this is now, and the sooner we realize that era is over (hopefully just temporarily) the better it will be for us, as well as the girls who continue to try week after week.

That’s not to say we shouldn’t feel frustrated. Sometimes, I do. The biggest thing that pisses me off about ‘Diva wrestling’ is how it forces actual wrestlers like Natalya to water down their skill set in order to compensate for lesser experienced opponents. I’m thankful she’s had this feud with Layla and Michelle because despite of where they came from, both of those women have solidified themselves as wrestlers. But if Natalya does become champion and ends up with a lengthy reign, she’s not always going to face wrestlers. There are girls on the roster that could end up getting title shots and not all of them are named Melina, Gail Kim, and Beth Phoenix. We have former champions in Alicia Fox and Eve, who have improved tremendously, but they’re not near Nattie’s level. If Natalya was to have a legit championship reign, she shouldn’t have to play the face to Alicia’s heel. And I definitely don’t want to see her play a heel to Eve’s bland face routine. I wouldn’t really want to see Natalya play a heel to Kelly Kelly‘s face. Those matches my excite some people, but can’t we all agree that Natalya deserves better?

The Divas perform with a horrible stereotype on them and the ‘E does NOTHING to rectify this. They constantly throw their girls in pointless matches and those rarely last more than three minutes. The women of the WWE aren’t allowed to perform at that top level and someone with Natalya’s talent deserves that top spot. A lot of people complained that Nattie was only the valet to Tyson Kidd and DH Smith, but in that role she thrived. She was given screen time. She was able to develop a personality. She got to play a heel and a face. She was great as both. How many Divas can say that? She was also at the forefront of the Hart Dynasty’s storylines and played a major role at last year’s WrestlemMania when Bret faced off against Vince McMahon. She certainly fared better than all the other girls at last year’s show.

Call me crazy, and perhaps I’m grasping at straws but I like to think that the WWE has a lot of respect for Natalya and where she comes from. She’s the only Diva who’s been booked strongly against Lay-Cool. Mickie James certainly didn’t get that. She’s been able to one up the golden girls on a consistent basis and in this day and age, getting put over Lay-Cool is a rarity. I honestly feel like the WWE has the attitude that Natalya is to good for the Divas Championship which is why we haven’t seen her win it yet. That’s how I see it.

This isn’t a shot at the other women who have held the belt. But Natalya is first and foremost a wrestler, and she’s had to turn herself into a Diva in order to fit in with the company’s mold of what a female athlete should be. Natalya should lose tonight and I hope she does. She deserves better than what she will get as the champion and I don’t feel like the division will go up should she have her name etched across the belt. There are a ton of great arguments that could dispute me, but remember, this is just my opinion.

The great Melanie Rob once said to me in a thrilling Skype conversation that Natalya “should have been Women’s Champion.” Melanie added that Nattie deserved to have her name amongst that lineage. No statement could ever be more true. Despite some hiccups (Stephanie McMahon and The Kat, anyone?) that title represented true women’s wrestling and what it should be. Natalya is everything young up and coming female wrestlers should aspire to be. It’s one thing to be born into the business. It’s another thing to make yourself stand out. To me, Natalya is the female Randy Orton. She’s got the pedigree and she has the natural Hall of Fame caliber talent to make herself the very best at what she does. She’s got charisma. She’s got character. She’s got the wrestling skills. Natalya is smart, sexy, and powerful which is apparently what every WWE Diva is supposed to embody. Many of them come up just a little short. No one represents what the division SHOULD be better than Natalya.

For those reasons, she SHOULD NOT be the WWE Divas Champion.

Here’s a little idea or food for thought. Un-retire the Women’s Championship and turn Natalya into a tweener character. Let her re-introduce the belt herself and say that this is the belt that should be represented. Let her give the crowd a history lesson and let her take that Divas Championship and toss it into the trashcan. Let the women who have held the Divas Championship become infuriated. Let the girls who are the wrestlers slowly back up Nattie. Split the roster and have this fantastic feud. The Divas versus the wrestlers. Let the wrestlers work with the Divas night in and night out. Get those lesser experienced girls the ring time and the rub. They will only get better from this. Let all of this culminate with the reinstatement of the Women’s Championship and let girls like Natalya, Beth Phoenix, Melina, Gail Kim, and Michelle McCool bring the prestige back to the women’s division.