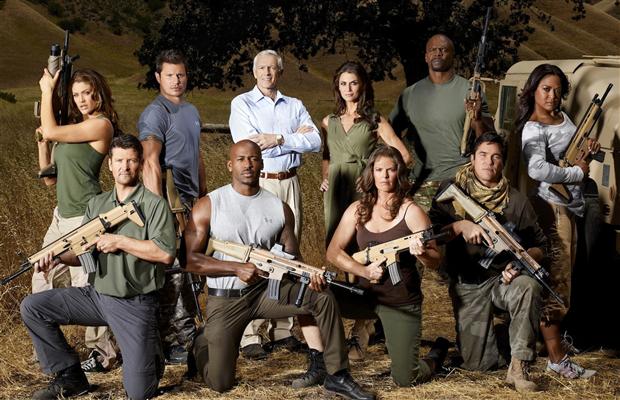 Diva Dirt welcomes Katie Gregerson to the team as our newest reporter.

I’ll be honest, when I first heard that WWE Diva Eve Torres would be competing in NBC’s new military-themed celebrity competition show, Stars Earn Stripes, two thoughts crossed my mind: first, how peculiar it was that Vince McMahon would allow one of his top Divas to participate in a show which goes head-to-head with Raw (it airs Mondays from 8-10 PM EST); and second, that I probably wouldn’t watch it.

Well, I did in fact watch the premiere Monday night. And daresay, I enjoyed it.

In case you’re unfamiliar with the premise of Stars Earn Stripes, here’s a quick rundown. Eight celebrities are paired with eight professional military and law enforcement operatives who train their celebrity to compete in simulated military “missions.” Each mission successfully completed is worth a “stripe” for $10,000 toward the celebrity’s chosen charity. Each week another celebrity will be eliminated, until the ultimate winner will have earned $100,000 for his or her charity.

And let me tell you: these missions are nothing to mess around with. The first mission alone involved jumping out of a helicopter into water; an amphibious beach landing; shooting a machine gun and a grenade launcher at multiple moving and stationary targets; and finally, breaking into a shed and detonating an ammo box while being airlifted to safety by the aforementioned helicopter. Oh, and all of this had to be completed while wearing 70 lbs of gear.

These are things the U.S. military does every single day. That’s exactly the purpose of Stars Earn Stripes: to shed light on what our troops and law enforcement face day in and day out to keep us living safe and free here at home.

Okay, so Superman may not be the toughest of the bunch (ironically), but he was certainly the most engaging on the premiere episode. He admitted to having a man crush on his coach Chris Kyle — a.k.a. the deadliest sniper in U.S. military history with 160 confirmed kills — and there’s an obvious bromance developing. Of all the contestants, Cain is definitely the most endearing and I do hope he lasts a while in the competition.

But while Cain and Kyle are developing a bromance, it seems there could be a bit of a romance brewing between Eve and her coach, U.S. Army Green Beret, Grady Powell. Upon learning that he was paired with Eve, Powell let out an excited “Hot damn!” and they spent quite a bit of training flirting with each other (Eve tells Powell he has the sparkle it takes to be a Diva, and he more or less tells her she has a big butt).

But true to the smart, sexy, and powerful Divas motto, Eve — who will donate her winnings to the USO — proved to be a whole lot more than just a pretty face. Powell exclaimed he’s never seen someone her size kick a door in half — that Brazilian Jiu-Jitsu must be paying off! — and she and partner Nick Lachey completed the first mission with the fastest time of 10 minutes and 12 seconds.  Due to her overwhelming self-confidence, athletic ability, and general bad-assery, I expect Eve to last a long time in the competition, and would even name her an early contender to take the whole thing.

However, she does have some formidable competition; Laila Ali and Picabo Street are both equally bad-ass athletic chicks. Of all the contestants Ali possibly took her training the most serious, and Street was forced to complete the mission by herself when partner Terry Crews had to be rescued from the water. Street is 14 years Eve’s senior, and yet at one point, she was only 30 seconds behind her and Lachey’s time all by herself. I was unbelievably impressed with her performance, and Eve will certainly have to fight her off if she wants to win.

As for the guys, Todd Palin and Crews made the biggest first impressions. Palin, too, had to complete the mission on his own when Dolvett Quince required rescuing, and Crews made the comeback of the night by proving to be a sharper shot than Quince in the elimination shootout. Even Eve admitted her concern over the competition from Crews and his coach, U.S. Army Master Sergeant Dale Comstock:

Overall, based off the premiere I would give Stars Earn Stripes a “B-“. It was interesting enough to hold my attention, but two hours was a bit lengthy. The celebrity contestants are all notable enough, and the operatives are quite obviously the real deal. If you love and appreciate the military and law enforcement, chances are you will enjoy this show. If you’re more of a liberal pacifist, however, you may not enjoy it as much – already there are several Nobel Peace Prize winners calling for the show’s cancellation, claiming it “glorifies war and armed violence.”

I have to disagree. In my opinion, what the show is glorifying is the selflessness of our military and law enforcement. They put their lives on the line for our freedom every single day, and the missions in which the contestants compete puts that fact into sobering perspective. Every single one of the celebrities conveyed a humbled appreciation for their coaches after completing the mission; Eve even choked up.

I for one am interested to see who will make it to the end.