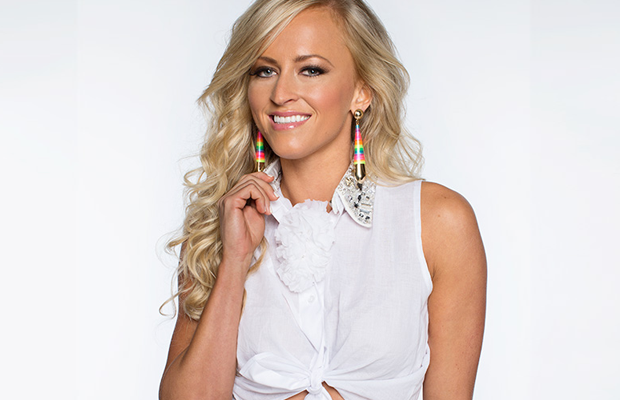 New Total Divas cast member Summer Rae recently spoke with the College Times about working alongside Fandango and filming for Total Divas, giving us a hint at a possible storyline for her on the show.

The differences between filming for WWE/NXT and Total Divas: “It was a little different being a reality show. I didn’t want to seem like I sounded fake ‘cause I knew the camera was on me. It took a while, then I just got used to it. Now those camera guys are pretty close to me. They’re my family now.”

On being paired with Fandango: “Being paired with Fandango is probably the best thing that could have happened to me because he’s so popular. He was amazing. When he first came on, fresh from his WrestleMania victory over Chris Jericho, it was great to just feel the crowd Fandango-ing and the crowd cheering for him. As a new Diva, I wouldn’t get that response right away at all. I’m not trying to go anywhere. I love our pairing together.”

Having a storyline with Fandango on Total Divas: “Yeah. He was on a lot doing a lot of scandalous things that I had to reprimand him for. [Laughs] I think that’s also something that’s interesting with season two of “Total Divas.” Fandango and I’s relationship has been on the surface level, as far as WWE programming with “Monday Night Raw,” “Main Event,” “Friday Night SmackDown.” You see us on camera and that’s about it. As far as backstage, not a lot of people know about our relationship. It’s great that people are going to see behind the scenes with Fandango and I, something that’s never been explored before.”

Read the full interview on the College Times.

What do you want to see from Summer/Fandango on Total Divas?