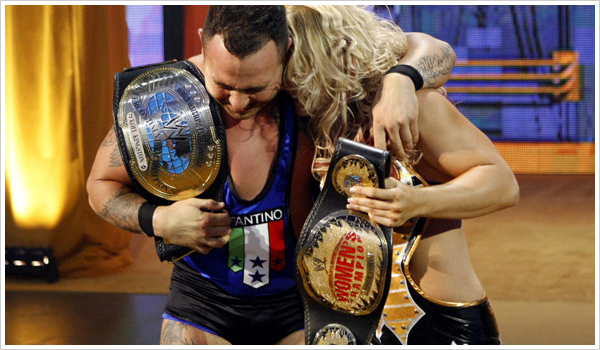 History was made at the 2008 edition of SummerSlam. Not only was the Women’s Championship defended for the first time in nearly a decade, but for the first time in the event’s 21 year history – the title changed hands at a SummerSlam. And what a match to make history in, because in my humblest opinion, the Winner Take All match stole the show from the all the hotly tipped matches on the undercard. For all four stars involved, they should be proud because this was one hell of a match, fun and fast paced with a historic title change to boot. While the Internet is rumbling today about the Hell in a Cell match and the first ever encounter between Batista and John Cena, this intergender match is definitely third in the rankings, beating out both the World Heavyweight and WWE Championship matches. Beth Phoenix and Mickie James have just cemented their places as the two top Divas in WWE today.

Like I said, the pace of this match was so fun and fast paced with Mickie and Beth really bringing their A-game. Given the multiple encounters they have had in the past, I wasn’t really looking forward to seeing them square off again but they really did the business at SummerSlam last night, seemingly working more cohesively than ever before. I really have to hand it to them, because their past matches have done nothing to excite me but I was definitely into all of the action in this match.

I would have loved to see more interaction between the females and the males, I mean come on, we’ve got Beth and Mickie in the ring not Kelly Kelly and Layla. These two Divas can mix it up with the men, I wish WWE’d gone just that extra mile and given us some of that intergender action. And hey, if Mickie’s amazing DDT on Santino was anything to go by, I think the women wrestling the men would have only enhanced what was a fantastic match. Speaking of that DDT, what a moment that was – the execution of that DDT by Mickie, wow!

Beth Phoenix picks up the victory with the Glam Slam on Mickie, I was expecting a little more of a controversial finish i.e. Santino pinning Mickie but at the same time, I think this was a nice moment. I guess Beth pinning Mickie finally closes that chapter and ends this feud. I certainly feel we’ve come full circle and Beth pinning Mickie symbolises that. I’m expecting Candice to show up on Raw tonight, so I’m glad that they had that closure in the Beth-Mickie feud that has occupied our screens on and off since Candice was injured.

If you haven’t seen SummerSlam, I advise you to watch this match however which way you want, but just get it done!