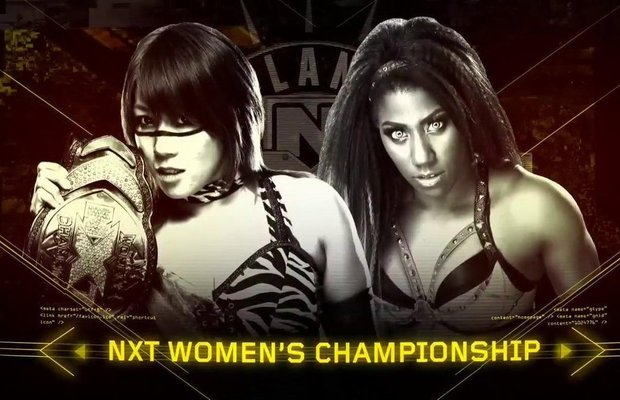 Tonight at, NXT TakeOver: Orlando, Asuka takes on Ember Moon as she defends her NXT Women’s Title. Can Ember Moon be the one to dethrone the undefeated Asuka? The Diva Dirt team weighs in:

Abir: As the build up for this match is so low key – what with a single backstage contract signing and pretty much nothing else. So, with that in mind – and the fact that Asuka will probably not debut on the main roster any time soon, she’s gonna keep up her streak and defeat Ember. She’ll then lose to Ember at a later stage, though.

Alex: I see Asuka retaining this one. If rumours are true, then it looks like Asuka is staying in NXT and she won’t be dropping that title. It’s a shame to see that this match has had nowhere near the background and development as it should have, so if Ember does win… that would be a massively underwhelming moment. So here’s to hoping Asuka retains, but I’m hoping that these two women blow the roof off and set the standard for the main roster women to follow!

Jack: As much as I like Ember in the ring, something is still missing for me. She’s not ready for the title just yet. Will Asuka transition to the main roster undefeated? I’m thinking so. Asuka wins.

Josue: This is the first real encounter between these two Superstars on NXT. That build up for this feud has been dry but I’m confident they’ll make up for it in the ring! One of these two will no longer be considered ‘undefeated’ after tonight and I think that will be Ember Moon. WWE has tallied Asuka’s rack of wins and I truly believe they’ll want to keep that going until Brooklyn. So Asuka will win tonight.

Kyle: This match was supposed to feel like this huge moment but it really hasn’t. Ember Moon does not feel like “The One” to end the 4414182906 day reign of Asuka. I do not feel thing major feeling in the air like the epic Bayley/Sasha encounter in Brooklyn in 2015. As much as people want to see a title switch happen here, I don’t see it. Asuka will retain here, and maybe the booking team at NXT works on either giving Ember a better story to eventually capturing the title or move on to another Superstar.

Matthew: Asuka’s streak is about to be broken. Look for Ember Moon get the big win and the title to go with it.

Stephanie: Ember should win tonight so she can begin a lengthy feud with Asuka and The Iconic Duo but I don’t have faith that NXT is ready to pull the trigger on Asuka’s reign. I expect a phenomenally close match but Asuka is going to resort to something sketchy in order to avoid the Eclipse. Asuka will win.

BREAKDOWN: 6 for Asuka, 1 for Ember Moon.