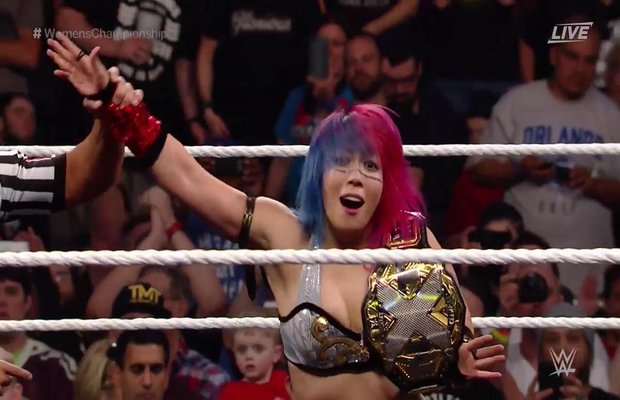 Asuka and Ember Moon have been set to collide now since Ember’s stunning debut last summer. Both are larger than life competitors who were both gong into this match undefeated.

As Asuka’s reign has surpassed 364 days, she’s broken records, becoming the longest reigning NXT Women’s Champ, the longest reigning champ in NXT history, and is catching up to Goldberg‘s undefeated WCW streak of 173 wins. She’s become cocky and arrogant, while Ember has stayed calm in her quest to usurp Asuka and usher in a new path forward for the NXT Women’s Division.

Tonight on NXT TakeOver, Asuka retained her title by any means necessary as she managed to avoid the fatal Eclipse by pushing the referee into the ropes, allowing Ember to lose her balance and Asuka to strike.

#WWENXT #WomensChampion @WWEAsuka has implemented a new strategy… which involves using the REFEREE to avoid an Eclipse! #NXTTakeOver pic.twitter.com/sa5Bt7Msgi

The match would start off with Asuka refusing to even shake Ember’s hand.

#WWENXT #WomensChampion @WWEAsuka offers a sign of respect… but it disappears before you can say "HANDSHAKE"! @WWEEmberMoon #NXTTakeOver pic.twitter.com/pGqpjxfMCR

Then both women would go back and forth, engaging in an all out mat wrestling affair before both would become easily matched at the get go. Asuka would hit Ember with her hip attack three separate times in an attempt to take her down early. Ember would battle back each time. She would then take to the air for a beautiful cross body as the match spilled outside.

She’d attempt the Eclipse but saw Asuka barrelling toward her and would out maneuver her.

Ember would then get caught in the Asuka Lock but manage to power out at the last moment. She would then dominate Asuka with strikes, falloway slams, and suplex variations.

The bout would come close again and again before Ember would attempt the Eclipse again. Asuka would get up at the last moment and toss the ref at Ember, making her fall and allowing Asuka to retain the newly redesigned women’s title.

The brand new #WWENXT #WomensChampionship is here! @WWEAsuka & @WWEEmberMoon battle for the right to hold it, RIGHT NOW at #NXTTakeOver! pic.twitter.com/Ws9FUP3N4v