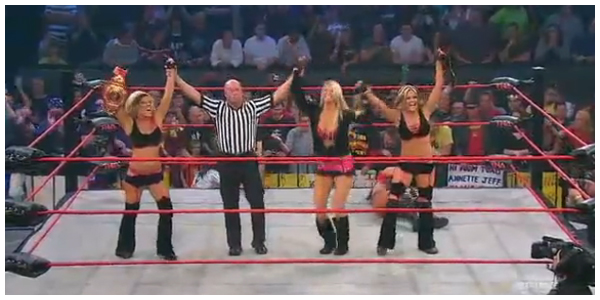 TNA crowned new Knockouts Tag Team Champions tonight in the wake of Awesome Kong‘s departure from the company. In storyline, Taz and Mike Tenay announced that Kong and partner Hamada had been ‘stripped’ of the belts after failing to defend them in the past 30 days. In actuality, the move is due to Kong coming to terms with TNA over her release.

The new tag team champions, The Beautiful People (Madison Rayne and Velvet Sky) defeated Saritaylor and the team of Tara and Angelina Love in a triple threat tag team match to win the belts.