The Divas Get Thankful, ClichÃ© As Hell 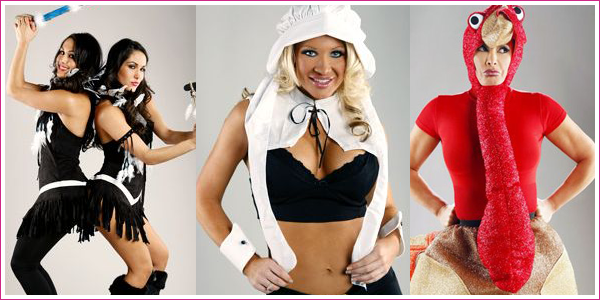 This Thursday is the great American holiday of Thanksgiving, and the Divas are celebrating in the only way they (seemingly) know how – dressing sexily and posing for pictures! Hoorah! Anywho, Candice, Michelle, Jillian, Kelly, Brie Bella, Nikki Bella, Melina, & Victoria, have dressed in their Thankgiving best – which, with their level of creativity, pretty much calls for 3/4s of the girls dressing all Pocahontas-like, sporting suede, feathering, and wielding tomahawks. All of this unimaginative Native American princess imagery probably has Marlon Brando spinning in his grave. To me, it just shows the lack of imagination most of the Divas have – they find the most clichÃ© way to dress up, show some leg and cleavage, and bam! You’ve got yourself a photoshoot. I’ve got to give credit to Victoria and Jillian for mixing it up, with Jillian sporting a silly Pilgrim costume and Victoria going all-out in a turkey costume. At least there’s some creativity out there.

Now, you may think I’m taking this too seriously, what with all my complaining. Perhaps the point for them is just to look hot, but if that’s the case, then we’re selling the Divas waaaay too short. I’d like to think they’re more than pairs of breasts and asses and have a bit of cleverness to go with it. So which, in my opinion, were the best and the worst?

BEST: I’ve got to give it to Victoria for thinking outside the box. She, as always, stole the show. She proves that Diva can be goofy, not take herself too seriously, and still not sacrifice her sexy image.

WORST: Kelly Kelly was one of many, many Pocahontas rejects, but she gets the worst of it. I mean, white fuzziness and pink fringe is about as far from the traditional imagery as you can get. Her poses are as dull as always, but this level of cardboard-cutout effort take it to a whole new level.