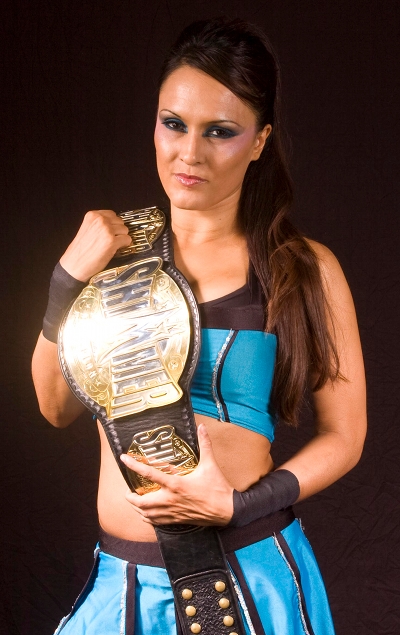 Two titles changed hands on October 2nd, 2011. In WWE, Beth Phoenix became the Divas Champion, while on the independent scene, Cheerleader Melissa became the SHIMMER Champion. In some ways, Melissa’s long-awaited victory was that much more special considering the long, emotional journey that she and the fans took to get to this point.

One of the most valued female wrestlers in North America, Cheerleader Melissa is always relied on to have great matches and wherever she goes — be it SHIMMER, NCW Femmes Fatales or RCW in Texas — is billed as one of the top attractions on the card. 2011 was no different and was perhaps her best year yet.

Melissa kicked off 2011 with a high profile victory over Taylor Wilde in the former Knockouts Champion’s retirement match in February. She also returned to Femmes Fatales in Montreal, scoring victories over the March, June and October tapings, as well as winning the Amazones & Titans tournament in August with Jay Phenomenon.

However, Melissa’s crowning achievement took place in SHIMMER. Returning for the March and October tapings, Melissa began working her way back up the ladder to earn another shot at champion Madison Eagles after losing in their last encounter. Melissa’s victories over the likes of Athena, Christina Von Eerie and Kana put her in line to face Eagles in the main event of SHIMMER 44, and finally, her journey to the SHIMMER Championship paid off. After appearing on all 44 volumes of the DVD series, Melissa was crowned the new champion — and the crowd in the Berwyn Eagles Club celebrated accordingly, almost tearing the roof of the building in a moment of euphoria.

In the modern era of wrestling where everything is so instant, it’s rare to see such a slow burn, but Melissa’s almost agonizing 44-DVD journey to winning the SHIMMER Championship was one of the women’s wrestling highlights of the year.

Melissa made history in the latter part of the year by taking part in what was said to be the first professional female wrestling match in Taiwan when she faced Makoto during the All Japan Pro Wrestling “Pro Wrestling Love in Taiwan” tour. Melissa’s involvement on the tour is all the more spectacular given that AJPW rarely features women’s matches, and hardly ever brings in “gaijin” (foreign) female talent.

Continuing her globe-trotting, Melissa flew to India to be part of TNA and Endemol’s new wrestling television show for the Colors network. Competing as Raisha Saeed, Melissa was one of only two female cast members, the other being Impact Wrestling star, Mickie James.

Outside of the ring, Melissa was part of a mini “rock n’ wrestling” resurrection as she starred in the Smashing Pumpkins’ music video for “Owata” along with Shelly Martinez, giving her yet another distinctive credit.

In 2011, Cheerleader Melissa proved that you don’t need to be a WWE Diva or TNA Knockout to have a busy or high profile wrestling career. In fact, since leaving TNA last year, Melissa seems to have gotten even busier. Picking just the right projects (many of which have buzz surrounding them), rather than wrestling for a different promotion every weekend, Melissa has managed to establish her name value, and this shrewd business acumen has certainly paid off given her varied accomplishments this year, including the SHIMMER Championship, starring in a music video, and traveling around the world.

In many ways, Cheerleader Melissa is female wrestling’s “independent A-lister”.