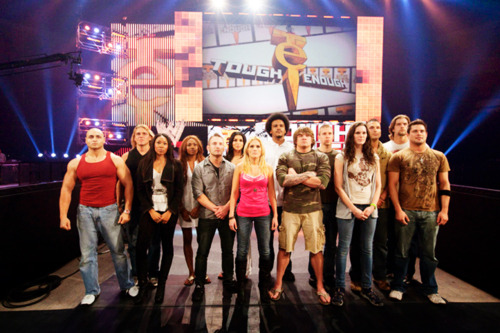 Wrestling with Reality
In 2011, Tough Enough returned and another batch of wannabes were taken to task by trainers Bill DeMott, Booker T and Trish Stratus, as well as host Stone Cold Steve Austin.

For 10 weeks, we watched, we laughed at and we empathized with the five contestants — Ariane Andrew, Christina Crawford, Ivelisse Velez, Michelle Deighton and Rima Fakih — as they battled it out to win a WWE contract.

Who can forget the infamous moment when Ariane told Stone Cold that her favorite match was Alicia Fox vs Melina? Who can forget Michelle being dubbed Miss 11 Years? Yes, from the very first episode, Tough Enough had us hooked.

Tough Enough, while not a perfect formula by any means, had the elements of great reality television: there were characters we loved — and characters we loved to hate, there was plenty of drama (remember Christina vs Ivelisse?), and a lot of laugh-out-loud moments.

However, beyond all of that, there were still characters to be appreciated. Rima Fakih impressed as she tried to shake off the prissy Miss USA tag, while Ivelisse showed a never-say-die passion for wrestling, struggling through an injury. We even felt empathetic towards Michelle Deighton for being a quitter. (She just wanted to be with her daughter. Aw!)

Though none of the female contestants won the show, three have since signed with WWE which is a pretty good success rate. Whatever the future holds for them — and the series itself (please renew it!) — remains to be seen, but we’ll always have those 10 weeks!