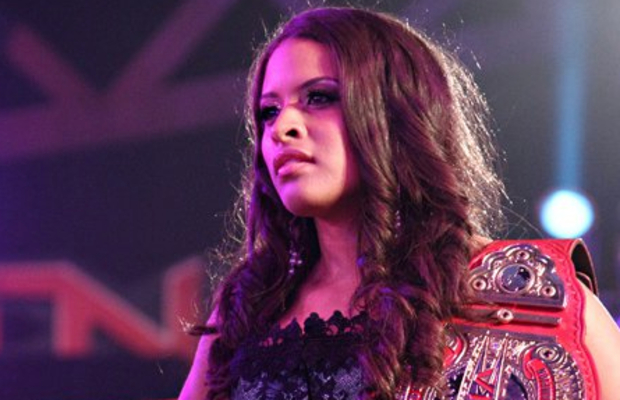 Former TNA Knockout and recent NXT local competitor Thea Trinidad praised Asuka during a recent interview on the Pancakes and Powerslams Show. In addition to relaying her experience facing her in NXT, she also recounted how she met Austin Aries and more.

Highlights of the interview are below:

On facing Asuka: “Up until I was standing in the ring with the cameras on, that’s when I started to believe the gravity of the situation. I was surprised that I wasn’t very nervous, because I think it didn’t click yet. And then as soon as I got there, it was like, nervous. Because I love Asuka. Her work is amazing. It was such an honor to be in the ring with her, and she’s an incredible person, so it was like a home vibe, because I had Sarita (Sarah Stock) there as the producer, I had Austin Aries there with me, and then Terry Taylor, who actually was the one who hired me in TNA. It just felt like a good family vibe. I felt like I was supposed to be there. It was amazing.”

On her relationship with Aries: “We had a talent meeting [in TNA]. I’ll never forget this because I wanted to punch him in the face, but we were having a talent meeting and I was talking to Bubba [Ray] Dudley. I was finishing my last sentence, and right when the meeting was starting, I hear somebody shush from behind me. And he was like, ‘shhhh.’ And I was like, ‘Who the [heck] is shushing me?!’ I was like, what? I don’t know what it is. You can tell me like, hey, settle down. But when you shush me? For some reason that’s like [shut up] in my ears. So, right away, I turned around with this anger, and I was like [to Austin], ‘Who the [heck] are you to be shushing me?!’ And he’s like, ‘Oh. I’m just kidding. The meeting is about to start and I was just messing with you.’ And I was like, okay, okay. Whatever. I’ll mess with him later. And then, he had a really great match… and we just started talking after that, and everything just kinda happened. But it all started from a shush.”

Thea also goes on to credit Tommy Dreamer for giving her a break in the business, and says Rey Mysterio and Lita are her inspirations.
To listen to the podcast, go here.
What do you think about this interview? Sound off in the comments below.
December 23, 2016