TNA Final Resolution in Review: Falls Count Anywhere, Even in the Loo 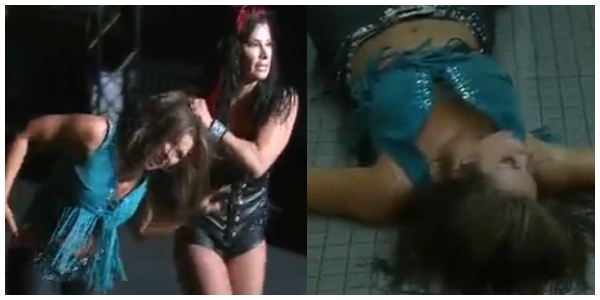 If you consider the fact that the rivalry between Mickie James and Tara has roots in their time in the WWE, this feud has been going on for a long time. In between these phantom WWE issues and now, there have been countless brawls and a match that ended in a double DQ. It’s inevitable that Mickie will eventually move on to challenge Madison Rayne for the Knockouts Championship, but is tonight really the last stop on the runaway freight train that has been Mickie vs. Tara? Yes, I know runaway trains don’t stop–don’t let that ruin my metaphor. Let’s just watch the events unfold and see if these Knockouts are really ready to move on:

We start with Knockouts champ Madison Rayne being interviewed by Christy Hemme. Madison says there’s no way Mickie’s getting to her or her championship, because she has to get through Tara first, an that’s not going to happen. I can appreciate that they’re not trying to hide the direction in which this feud is headed. Also, is it just me (I mentioned this on Twitter), or does Madison’s dark hair make her resemble Mickie a bit? Do I smell a “long lost sister” Maury-esque twist coming up in this storyline? No? Just me? Anywho, she continues to play up Tara, saying that she’s here to “protect the princess”. Is Madison right–will Tara really protect her, or will she simply be paved into Mickie’s road to Madison?

We’re shown a video package chronicling this feud. Lots of upturned tables and uncomfortable fighting attire. With all the brawling and disqualifications that have come from this feud, this Falls Count Anywhere stipulation really is the best fit. Tara’s out first on her hog, and Mickie follows. Tara exits the ring, gets Mickie to follow, and the match starts on the outside. They trade blows, and Tara tries to climb over the barricade, but gets crotched on it. Whether you’re a lady or a gent, that does not feel good. Mickie goes for the first pin attempt of the match, but Tara kicks out. Mickie continues to beat on Tara, alternating between face smashes on the barricade and face smashes on the ring apron. She tosses Tara back into the ring, climbs the turnbuckle, and takes down Tara with a flying dropkick. She goes for another pin, but Tara wraps her legs around the ropes and forces a rope break.

Out of the pin Tara takes control, choking Mickie in the corner. Mickie soon turns the tables, attempting a corner hurricanrana, but gets tossed onto the apron. Tara slams Mickie’s head into the turnbuckle, and she falls to the mat outside. Mickie then pulls a Bella/Hornswoggle and slips under the ring skirt, disappearing. Tara is confused, but given how many times she was screwed over by the Bella Switch™, you’d think she’d just sit still and wait for Mickie to come out instead of risking an ambush. Mickie, of course, emerges on the other side and dropkicks Tara off of the ropes she’s perched on, knocking her out of the ring. A baseball slide knocks Tara to the floor again, and Mickie joins her outside the ring.

They trade blows a bit, and Tara whips Mickie into the barricade before dragging her to the other corner and tossing over her that section of barricade. The match spills out into the crowd. Tara slams Mickie into some steel chairs and goes for a pin, but Mickie kicks out at 2. Mickie whips Tara into some giant piece of the building’s infrastructure, and Tara starts to crawl, seeking refuge in the back area of the building. Maybe she’s just magnetically drawn to the catering area, since that seems to be their prime fightin’ place. Mickie shoves Tara into the wall and chokes her up against it. They fight further back into the building, and Tara tosses Mickie into a line of wheelchairs. The battle continues until they reach a food stand (not catering, but close enough), and Mickie squirts some water into Tara’s eyes. Not a particularly painful attack, but a bit blinding, I suppose.

The fight moves on, with cardboard signs and chainlink fences coming into play before Mickie eventually reverses a powerbomb into a back body drop onto the concrete. Mickie goes for the pin, but only gets a 2-count. They end up by the garbage cans, taking turns tossing each other at them, and Mickie rolls Tara up for another pin attempt. Tara kicks out and regains control and drags Mickie by the hair before Mickie turns the tables and hits a flying Lou Thesz press onto the concrete. Another pin attempt, another kick out. Tara takes Mickie by the hair and takes her to the restrooms. She opts to take them into the men’s restroom instead of the ladies’, for whatever reason. Brawling inside, a few men run out, with a lone straggler struggling out with his pants down. Meanwhile, Mickie takes Tara into a stall and gives her a swirly, middle-school style. They continue to battle until an occupied stall opens and sprays Mickie with…… a fire extinguisher! Okay, that was lewd. I apologize.

The culprit is Madison, of course, laying in wait. She hits Mickie with the Knockouts Title and leaves Tara to cover her, yelling for the referee, who for some reason was hanging out outside and therefore did not see the attack, to come back in and count the pin. He returns, counts the pin, and Tara wins the match. Mickie lays prone on the bathroom floor while Tara and Madison celebrate. Someone should put that “wet floor” sign in the doorway and give Mickie some privacy while she regains her wits.

The match felt like a fitting culmination for this feud, given how this rivalry was built around all-out brawls instead of actual wrestling. Still, it wasn’t much more than what we’ve seen from them already, though I’ll admit that the bathroom brawl was something new. On the whole the match was exciting, and I can always appreciate a match that bends the boundaries for women’s wrestling a bit. Still, I don’t feel they did as much as they could. It mostly amounted to Mickie and Tara tossing each other into structures–the back body drop and Lous Thesz press were impressive and I’m sure they smarted, but more big-time spots would’ve made this stand out amongst the countless similar brawls these two have already had. When a feud is build on a foundation of scrappy brawls, you’ve got to up the stakes in order to have a big “blow off” match. I don’t think they did that.

I definitely didn’t see the Madison attack coming, though, and Tara’s win was unexpected. The question is, though, whether or not this Tara/Mickie feud will go to round 3 or if Madison’s attack will lead to Mickie shifting her focus to her instead of Tara. We won’t know until later tonight, when Impact is taped, but I’ll wager a guess and say that it’s Madison/Mickie now. The end of the match was all about creating animosity between those two. Personally, leaving me unconscious on the floor of a filthy mens’ bathroom is enough to build some animosity in me. Only time will tell if it’s enough to make Mickie change her dance partner.