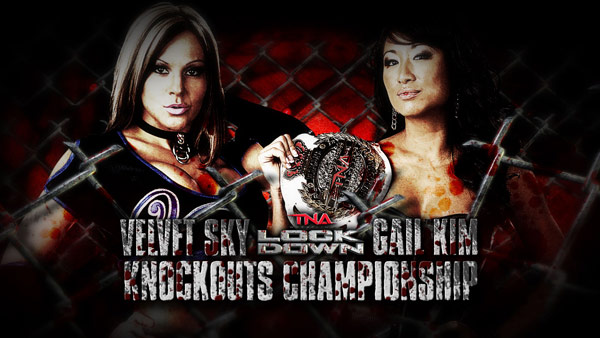 Tonight at Lockdown, Gail Kim defends the Knockouts Championship in a cage match against Velvet Sky. Who’ll walk away with the title? The Diva Dirt team weigh in…

Bobby: Well, this will be interesting to say the least. I like that TNA has kept Gail as the champion for so long because after the travesty that Winter, Velvet Sky, and one of Mickie’s reigns were, I couldn’t take another terrible short mess. I do think it’s time for Gail to lose the title though because there isn’t really anyone left for her to face. All of the women that have been built up during her reign, she’s defeated (except Velvet so far), and the ones she hasn’t feuded with yet don’t seem to be large on TNA’s radar unfortunately. I was not a fan at all of Velvet losing the title so quickly after winning it, and I would love for her to be the one to dethrone Gail and get an actual reign as championshp. I don’t necessarily think it has to be at Lockdown, but I do think within the next two or so pay per views, it should go to Velvet. As for Lockdown, there is no predicting TNA in all honesty so I’m just going to randomly say Velvet Sky regains the title.

Cryssi: FINALLY Velvet Sky gets her rematch for the Knockouts Championship, and color me crazy, I have a feeling she could very well walk away with the victory. Gail Kim never should have gotten the title in the first place in my humble opinion but what’s done is done, and this is the best chance to rectify this. Velvet is so beloved by the TNA faithful and putting her over Gail in a cage match gives her a ridiculous amount of legitimacy. It also gives Gail a chance to go super super heel, having been beaten in a hardcore environment by this supreme babyface. I think a real Gail/Velvet feud would be money for TNA in terms of the Knockouts and it would be a crying shame if they didn’t capitalize on this. Velvet deserves a lengthy reign and I believe she will get it. Velvet Sky will win the championship tonight and if she does, I may just care about TNA again.

Katelyn: I pick Velvet Sky. I really want to see her win after her first reign was so abruptly cut short.

Melanie: My opinion on this may be the unpopular one, but I’d like to see Gail Kim hold the title through July or August. It’s so rare these days that we get super long title reigns for the women on TV and I think it would do so much for the belt to keep it on one champion for a good 10 months or so and I feel that Gail already being so long into her reign already has the best chance of holding that belt for a lengthy period. I remember Kong’s title reigns lasting months and even one of Madison Rayne‘s reigns (ouch, headache!) lasting a long time, and I really feel that will help the belt so much. It will make it that much more anticipated when Gail drops the belt. Frankly, I think she’s been great as champion and I enjoy her work. I’d also like to see this feud with Velvet last longer and they could really build up Velvet’s win in the summer. You could have Gail do something dastardly to retain the belt at this pay per view and add more intensity and personal rivalry between the two. Velvet is the ultimate underdog and Gail has been a great heel champion – there’s so much more storyline to explore here. I’m going with my gut and predicting that Gail Kim retains.

Who do you think will win tonight? Tell us in the comments!