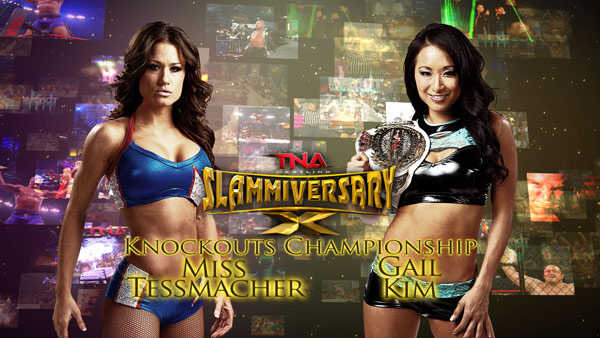 The Knockouts Title is on the line tonight as Gail Kim once again faces off with Brooke Tessmacher. Can the rookie Knockout finally overthrow the champion? The Diva Dirt team weigh in…

Bobby: I’m really excited for this match due to a lot of reasons. First of all, the feud is actually continuing for more than a month. I’ve strongly disliked simply going from challenger to challenger each pay per view, and wished they would at least carry the feuds out for a longer time. Second of all, it’s in Brooke’s home of Texas which could very well add some hype to the match in its own right. I think the company did an excellent job promoting the match for only having one show to do so, and it feels like Brooke has truly earned the spot as top contender. I think it would be a cool moment for her to win in her hometown, but will TNA finally pull the trigger on Brooke as Knockouts Champion? Every single month I feel like I go against Gail retaining and she ends up doing so, but there’s something about the home field advantage that I think may be enough for Brooke Tessmacher to finally topple Gail and win the title.

Cryssi: When I think of Slammiversary only one thing comes to mind. It’s not the Knockouts match that’s for sure (sorry ladies, it’s just to predictable that Brooke Tessmacher will be the new champ ahem). It’s not the fact that nu-HOT Bobby Roode will take on the 76-year old Sting in a title match. It’s not the fact that the chilli cheese fries I just ate are raping my stomach at the moment and that I’m sure the show will leave me with a similar feeling. No. All that comes to mind is come Slammiversary the Khal to my Khaleesi (no offense Prince Dawlf as you are the Daario to my Dany), the wonderfully blonde and incredibly hot CHRISTIAN could very well appear on my television. That alone has me shaking and crying with excitement. I wonder what he’s going to wear??? Oh, go Brooke… Tessmacher. ;)

Erin: It definitely seemed like they’ve built Brooke up as a very legitimate challenger, given how she performed at Sacrifice and how she earned this title shot. I’m getting a feeling vaguely similar to the one that I felt when Divas like Kelly and Eve rose to the title scene and ultimately won the belt: they’re underestimated and not considered a threat, but gradually show that they’re more than capable. I think this might be Brooke’s time, especially when thinking about how long Gail’s held the belt. I say that Brooke Tessmacher wins the match and becomes the new Knockouts Champion.

Melanie: I had previously predicted that I thought Gail Kim’s title reign would last until Slammiversary, but given the last minute addition of this match — it was only made official on Thursday, three days before the show — I’m now not too sure if they’d put the title on a new champion here. Brooke has really risen through the ranks, proven to be a talented worker, and has held her own in the ring against veterans much more experienced than her. This is a very hard prediction to make for me this time as I’m in two minds, but ultimately I’ll stick with my original prediction that Gail’s title reign ends tonight. So, Brooke Tessmacher wins.

Who do you think will win the Knockouts Title match tonight?