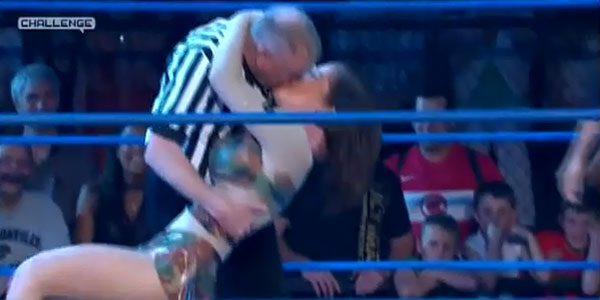 Hello there, and welcome to the first of hopefully many TNA Xplosion Watches. It’s been some time since there was a Knockouts match on the internationally syndicated program, but this week the curse was finally broken, as we got to see knockouts, Madison Rayne and Brooke Tessmacher, square off in one-on-one competition. Not only that, but things get a bit heated (I’ll let you discover the meaning of that) between Madison and Senior Official, Earl Hebner. Many questions might be forming right now, but the biggest one on my mind is, how am I going to write a TNA recap without the elegant Miss Karen?!

Let’s see if this challenge can be completed and check out the match!

As everyone’s favorite Killllerrrrr Queeennnnn makes her classy, hand-waving entrance, we all take notes on how to better our lives from the perfect, Madison Rayne. She steps into the ring and waves to her adorning fans, as the upbeat rock theme that my iPod longs for of Brooke Tessmacher hits. Being this match was taped prior to Thursdays iMPACT showing, Brooke still has her tag team championship in hand. She slides up onto the ring apron and removes her big fur coat, before throwing it onto the camera lens and climbing into the ring to remove her skirt.

As Brooke now displays only her ring gear, the bell sounds and both Knockouts lock up. Tessmacher quickly takes control with an arm drag, as Madison tries to cling to Earl Hebner. Roll up by Brooke out of nowhere, as Queen Rayne asks “Earl-ie” what he is doing actually counting the pinfall attempt. Madison goes for a clothesline, but Brooke catches her with a quick backslide for a two count. Rayne calls for Brooke to stop, as she once again goes over to Earl Hebner to question his actions. Brooke takes advantage of this distraction, absolutely planting Madison in the face with a dropkick to send her out of the ring.

Rayne tells everyone to hold on, as she takes it upon herself to grab a microphone. Madison demands a time out as she tells Brooke to back up since this isn’t a bikini competition! Rayne asks Earl what he’s doing ignoring her flirting, stating he liked it a couple weeks ago! (oh god Madison, what have you been up to lately?!) Earl has heard enough, and snatches the microphone away from a distraught Madison. Brooke runs up from behind and spins her around, only Rayne takes control with an eye rake. She throws Tessmacher into the corner and chokes her with her boot as we head to a commercial to the sight of Madison Rayne throwing Brooke across the ring.

We return to see Rayne applying a choke hold in the center of the ring. Tessmacher manages to fight out and run off the ropes! She slides underneath a kick attempt, but Madison proceeds to kick her in the stomach and hit a snap suplex. She keeps it connected and drops Tessmacher with a nice neckbreaker for a two count. Rayne grabs hold of Brooke’s hair and pulls it until Earl gets to a three count. From there, she locks Brooke’s head between her (Madison’s) legs and does a little shimmy for ol’ Earl standing in the corner. Madison then flips over and slams Tessmacher’s head into the canvas multiple times until Earl tells her to stop.

Madison walks over to Hebner and asks what’s wrong, before slowly covering Brooke for a two count. The crowd tries to get behind Tessmacher, which seems to help her as she nails a jawbreaker out of nowhere. Both women run off the ropes and connect with a double facebuster! Earl begins his count, as Brooke takes control with a few punches. She is thrown off the roeps, but ducks a kick attempt and fires back with a clothesline. From there, Brooke capitalizes with some running fists to the chest, following it up with a unique front suplex slam that looks like it may have broken Madison Rayne’s nose!

As I pray that our queen’s face is not damaged in the slightest, Brooke covers but does not get a three count. Brooke throws Madison into the corner, but Earl Hebner is in her way and she manages to stop herself. Rayne, now growing tiresome, asks Earl what he’s doing, before Brooke punches her in the face and she falls back into his arms! He holds her in position as she screams out in fear! Hebner than proceeds to kiss Madison on the lips and do a little dance with Brooke, which actually manages to distract her long enough for Madison to get the roll up victory! Madison looks on pissed off, as Earl seems very happy with what took place.

Thoughts: Pretty entertaining match overall. I thought the two meshed well together and Madison played the Earl Hebner role up perfectly at the end. It is kind of creepy to see him make out with her though, but I liked that in the end it actually helped Madison get the victory by distracting Brooke long enough to be rolled up. I think this was good competition for both ladies, as I always like to see them wrestle, but with such a jam-packed roster, may not get to as much on iMPACT as I would like to. Hope to see more matches on X-Plosion in the future, but perhaps with less of Earl Hebner kissing the Knockouts during them.