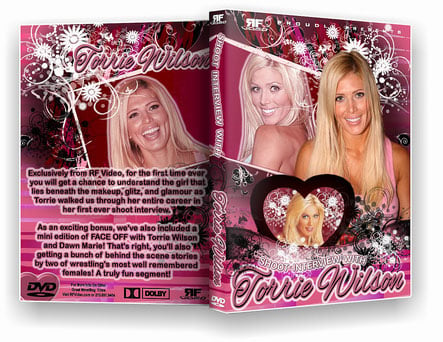 Thanks to the folks at RF Video for letting us know that their shoot interview with Torrie Wilson is now available for purchase on their site! It’s been just one month since the interview was filmed at the Wrestler’s Rescue event in September but the DVD is already on sale! If you ask me, this is a must have for any Torrie fan or any fan of the ‘golden age’ of Divas. I’m certainly looking forward to getting my copy in the mail!

You can purchase the DVD for $20 or $35 for an autographed DVD. Check out more details below:

Torrie Wilson, one of wrestling’s most beautiful divas sat down with RF VIDEO to conduct her first ever shoot interview! For the first time ever you will get a chance to understand the girl that lies beneath the makeup, glitz, and glamour as Torrie walked us through her entire career.

Coming into wrestling from a background of fitness competitions and modeling, Torrie described what it took to be successful in those arenas and compared them to the grueling world of professional wrestling. Going straight into the WCW madhouse, Torrie was around all the big names and controversial events and was more than willing to share her thoughts on all of them. Vince Russo. Eric Bischoff. Hulk Hogan. Randy Savage. Scott Steiner. Kevin Nash. Ric Flair. David Flair. Eddie Guerrero. Shane Douglas. The names and stories come fast and furious. We asked Torrie about the rumors of Kimberley Page being jealous of other girls’ success. Who helped her the most? What were the politics like? How hard was it being a women in such a testosterone filled workplace? How did her romance with Billy Kidman start? We also got Torrie’s reactions to some of the crazy gimmick matches she was a part of, including being in a cage and on top of a scaffold.

Torrie talked about her transition to the WWE and what type of impressions all the Superstars made upon her. Trish Stratus. Vince McMahon. Stacy Kiebler. Tajiri. Dawn Marie. Al Snow. Kurt Angle. Nidia. The Undertaker. Jamie Noble. Sable. Billy Gunn. Triple H. Stephanie McMahon. Carlito. Every major angle and storyline is covered. We asked Torrie point blank about how her family felt about her being in Playboy as well as how it changed her life. Torrie was there to see the fight between Booker T and Batista and gave us her reaction. The shoot also became very emotional when the subject of Chris Benoit came up. This is one DVD where you’ll get an interesting comparison between the workings of WCW and WWE from someone who was in both companies during some truly remarkable times.

As an exciting bonus, we’ve also included a mini edition of FACE OFF with Torrie Wilson and Dawn Marie! That’s right, you’ll also getting a bunch of behind the scene stories by two of wrestling’s most well remembered females as they sat together and answered questions about their shared time in WWE. Their favorite angles. Their favorite matches. Their favorite Vince McMahon stories and much, much more. A truly fun segment!

You can pick up the DVD by clicking here. There you can also read the questions asked to Torrie! I’ll be writing up a review as soon as I get my DVD!