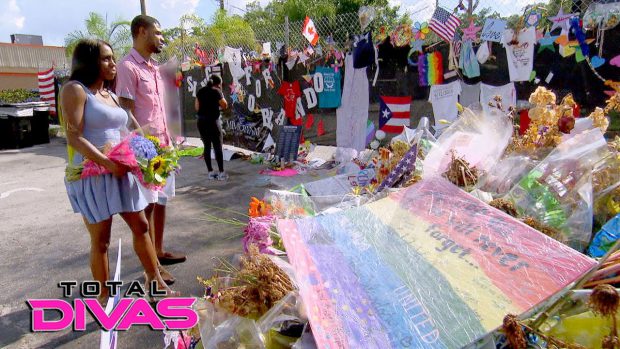 On this Wednesday’s episode of Total Divas, Naomi and her uncle take an emotional trip to Orlando, Florida to visit the site of the PULSE Nightclub and pay their respect for the victims of the horrific tragedy that occurred there.

Natalya grows impatient with Lana when she stops by for a visit with the Neidhart family. During a lesson in shot put with Jim “The Anvil” Neidhart, Lana accidentally breaks Natalya’s car window.

The episode also sees the Bellas shoot for their cover of Latina magazine. During talks of upcoming projects, Nikki suggests that they make the most of their time while they can but Brie shares she is already in the process of starting a family.

Season 6, Episode 2: “Quickie Fix” synopsis: “Trinity returns to Orlando to honor the victims of the Pulse Nightclub shooting; Nikki accuses Brie of sweeping Bryan’s depression under the rug; Lana annoys Nattie as she prepares for her championship run.”

This episode of Total Divas will air Wednesday, October 23rd at 8/7c on E!

Will you be watching the upcoming episode? What are you most excited about watching this week? Let us know in the comments below!