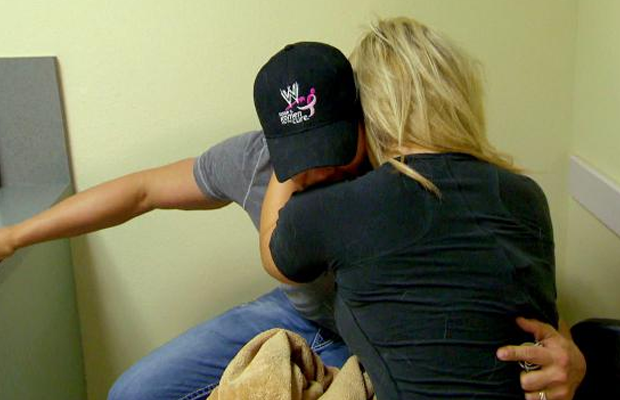 Ohmygod. I knew tonight’s episode of Total Divas was going to be difficult for me, but even I underestimated just how much it would get to me. When I was seven, a stray cat gave birth to kittens in one of our flower pots. I loved all the kittens, but there was one in particular that became my cat. I named her Calico and she was in my live until I was 24 years old. I remember our last night very clearly. She would always sleep in my bed with me but couldn’t make it up there that last night. She curled up on my floor and slept there until I woke up. Later on that day, she passed away on our couch, with me beside her the entire time. I held her as she took her last breath and her death still hurts. Calico was more than just a pet, she was a best friend. I will always love that cat more than anything in this world and not a day goes by that I don’t think of her in some capacity. She was my family, and to watch what Natalya (Nattie) and Tyson Kidd (TJ) went through with Gismo broke my heart into a million pieces.

If you follow Nattie on Twitter, you know that Gismo was her baby. She was always posted photos of him. He was basically her son. Watching them dealing with Gismo’s declining health and doing their best to try and keep it together wasn’t easy. I cried my eyes out during the entire episode and thinking of my cat isn’t helping me calm down either. All I want to do is cuddle with my furbabies that I have now and make sure they know just how much I adore them. It’s never easy losing a pet, because that pet becomes someone you love. I give Nattie and Tyson all the love and respect in the world for dealing with this as stoically as they did. It wasn’t easy on either of them, or their other baby, Charlotte. Cats know when something is wrong and it affects them. Tyson brought home a kitten for them, an adorable little thing that looked it could have Gismo’s offspring. They named him King Louis, because Nattie always believed that Gismo was the Louis Vuitton of cats.

I cried. It’s still tugging at my heart as I write all of this. Pets are so, so special and mean so much to so many people. For some, their pet is all they have. That’s why they’re family. I can’t say it enough, but my heart goes out to Nattie and Tyson. They handled the situation as best they could and I’m so incredibly happy that they went through it together. They’re an amazing couple, and very nice people (I’ve met Nattie, she’s beautiful inside and out). Thank you two so much for sharing Gismo with the world. I know he brought you guys a lot of joy, and I wish you two and Charlotte many years of happiness with Louis.

The rest of the episode was kind of a blur to me to be honest. Nikki and Brie fought the majority of the time due to Brie’s singles push, and Naomi (Trinity) and Jimmy Uso (Jon) had their problems. Jimmy really struck a nerve with me. No one likes a jealous man and through my tears, I was able to be rendered pretty speechless when he decided to get involved in with her career. It’s one thing to show up at a photoshoot and get upset because your woman is showing off her body, I kind of get that and it’s kind of cute, but Jimmy just took it to another level. Naomi had every right to bring him outside and go off on him, because someone’s career is sacred. You can’t mess with that under any circumstances, and he knew after she stormed out that he had messed up big time.

As they were leaving the arena, Naomi rightfully refused to ride in the car with him, and then refused to tell him who she was riding with because he would probably just be jealous. I did crack a smile at that, because she was probably right, but the smiling stopped. It led to a pretty sweet heart to heart between them and a lot of things came to the surface. It takes a big man to admit that he’s insecure that’s exactly what Jimmy did. Naomi handled herself well and they made up, and it was sweet. Couples go through ups and downs and rough patches, and it was nice to see them able to work it out.

Brie and Nikki hit a wall as well, but that’s to be expected with sisters and honestly it was only a matter of time before Nikki’s injury became an issue. I thought it was real snotty of Brie to continuously refer to the injury as a vacation but at the same she was putting a lot of pressure and stress on herself to keep the Bella brand going in Nikki’s absence.

It’s well documented that the twins have always been a team together on television and on the road so Brie was kind of forced to branch out of her comfort zone and start performing on her own. All these elements as well as Nikki’s frustration and uncertainty with her injury combined for lots of delicious tension in this horribly sad episode.

As Brie’s star is rising, Nikki can’t help but wonder if hers is fading and during a brunch featuring the other cast members – Cameron (Ariane), JoJo, Nattie, and Eva Marie – all the drama finally boiled over. Too many petty remarks finally built up and Nikki went at Brie for everything that she’s been saying. Brie didn’t seem all that bothered and merely pointed out that someone was going to have too teach Nikki to wrestle again should she ever decide to get back in the ring. Ouch. Bella loyalty won out in the end with the twins coming together after Brie’s amazing performance at Night of Champions. She didn’t win the Divas Championship but Nikki was beaming with pride at how well her sister did. I love them.

This episode was so difficult for me and there’s just not a lot of hidden gems this week. I was to blinded with tears to properly watch but the moment that made me lulz was when Brie threw Mama Bella under the bus for having a boob job like Nikki. Brie! You can’t just put your mom on blast like that! She’s your mom! I hope these Mama Bella cameos during pay-per-views keep happening. She’s awesome.

Next week is the season one finale and it’s promising to leave us wanting more. Brie Mode rears it head once again the consequences could end up being pretty ugly for Nattie!