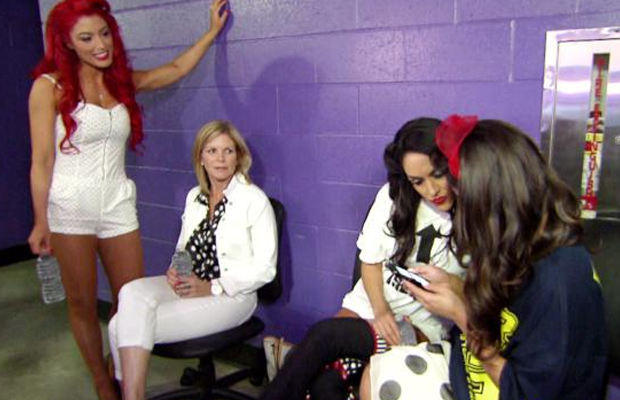 Okay… seriously, can I just say “THANK GOD” that Total Divas is back in my life? Sunday nights just haven’t been the same since the show went on hiatus back in September (is that even right? The lack of caffeine and chocolate in my new diet has me delirious and hungry…), and that’s even with The Amazing Race being on television. I love me some drama from The Amazing Race, don’t get me wrong, but not even them going to Norway this year and stringing fish heads has filled the void left in my reality television heart. I know, I know… but thats how much Total Divas means to me. It’s insane. It’s asinine. I can’t even explain it really. But thankfully, it came back and it came back in a big, big, BIG way.

This week’s precious episode centered around the dramatics leading up the SummerSlam, the second biggest event of the year on World Wrestling Entertainment’s calendar. Eva Marie was in fine form, shoving her HOTTTTTTTTTTT Maxim spread in everyone’s faces, even at brunch when people are trying to digest their breakfast (looking at you HaterJo)! This brunch was basically the catalyst for what was to come between Eva Marie, Brie and Nikki Bella. Brie brought up the fact that the twins had been on the cover of the Latin version of Maxim, and what makes that so neat is that it’s actually available in more countries than the American version. The brunch table got mighty quiet, as you can well imagine, but trust me when I say that Eva Marie wasn’t silenced for very long.

Miss Red was given a opportunity by Mark and Jane (YES HEEL JANE IS BACK) to valet for the Brie Bella during her singles match against Natalya come SummerSlam. She would be joining Nikki at ringside, and Cameron (Ariane) and Naomi (Trinity) would get a chance to be in Nattie’s corner. That was a boost Eva Marie’s ego that she didn’t really need, and it just manifested itself throughout the entire episode. At her first ever signing, Eva Marie was pretty overwhelmed to meet a lot of fans who absolutely loved her, including one who even declared that Eva was her idol. Yes, they did have matching hair. Of course they did.

During a break from doing voiceovers for the new Flintstones movie, Brie decided to Nikki and Daniel Bryan (Bryan Danielson) that Eva actually approached her while they were in the gym and asked if she could be Brie’s new tag team partner if Nikki didn’t come back. That infuriated Nikki, who was already wound up over Eva thanks to a rumor going around that Eva would be paired with John Cena for SummerSlam. The sassy Bella basically threatened to bitch slap Eva.

Of course, it didn’t stop there. Eva seemed to get a kick out of the fact she had signs in the crowd dedicated to her and she brought this up backstage to the Bellas… IN FRONT OF MAMA BELLA. Like seriously… what nerve! Nikki wanted to beat that ass, but Brie basically ripped into Eva’s character and the type of person she is acting like, and told Nikki to just not even worry. Of course, she said it with a lot more words than what I’m typing but you get the picture.

Nikki had a lot on her plate this episode as well. In addition to getting herself back on the road with the company, there were some things going on with John that were basically out of her control. To sum it all up, he had been working injured for awhile and Nikki was growing worried because he wasn’t going to get it checked out. He reluctantly agreed to go and get it checked out, and after that we didn’t hear anything else. During a SummerSlam kick off party, Nikki and John were walking their first red carpet together as a couple. He got a text message that sent him scattering without really a word to Nikki. She was clearly upset, and rightfully so, and just decided to give him space.

Finally, the day of SummerSlam, Nikki decided to confront John about what was going on. He revealed to her that he was injured and it was pretty bad. His triceps was basically detached from where it was supposed to be and he could be out for up to half a year. Nikki was stunned, to say the least. Despite that, John went on to compete later that night against Daniel, in an amazing match that would be his last for awhile. After Daniel won, John came backstage and was visibly shaken up. It didn’t look good. Awww! Poor John!

I also never thought I’d have sympathy for Vincent, but he definitely got victimized by Cameron in this episode. Also victimized by Cameron in this episode; a blue car, slow driver, and Starbucks cup. So, I think it’s fair to say that Cameron has a lot anger issues and they were on full display this week. After road rage got the better of her, Cameron had an altercation with a driver who was driving too slow. Harsh words were exchanged and luckily for Cameron, Naomi and Jimmy Uso (Jon) were there to jump in. Jimmy pulled her away from the scene but not before Cameron through her Starbucks drink at the man. Naomi took over driving after that, but Cameron’s temper didn’t take a backseat.

Vincent got the full effect of the rage at the SummerSlam party even though he was being harmless for once. He just wanted to dance and have a bit of fun, but Cameron just ended up screaming at him. They finally went off to fight in private and Cameron shoved herself away from him at one point. Vinnie went and asked Naomi to speak to her friend, and Naomi laid i out there for her. It was a great conversation and Cameron really listened. We also got a glimpse of Cameron’s past when she sat down with her Mama to have a heart to heart. A lof of Cameron’s distrust towards men comes from things that happened when she was a child and she agreed to work on her anger issues. It was such a sweet scene between Cameron and her mother, and words can’t even begin to express how awesome Cameron is on Total Divas.

Cameron went the extra step and got together with Vincent, Naomi, and Jimmy for a rooftop double date. She toasted to her friends and apologized to Vincent, who once again promised to stick by her side no matter what. He really, really loves Cameron, and he’s growing on me. What can I say? I feel like deep down, Vincent is just some big softie, and that gets me every single time.

Gahhhhhhhhh I LOVE this show more than anything. And because I love it so much and want to talk about it as much as possible but can’t spend time typing up every single thing… I’ve decided to take a cue from EW’s Annie Barrett who absolutely slays with her Dancing With the Stars recaps. I’m going to present you the five hidden gems of each episode, those precious little jewels that made me cry tears of laughter.

Coming in at number five this week was the debut of WWE Diva, Alicia Fox. Could she potentially end up on season two of our favorite show?! She was certainly rubbing Nattie’s misfortunes in her face, and at the most inappropriate times too – the red carpet, a signing. It was beautiful and yes, I absolutely loved it. More of Alicia, PLEASE! She was born to be on this show!

At number four, we have the lack of JoJo. Is it cruel that I’m laughing because she was barely in the episode? Absolutely. Do I feel bad about it? Absolutely not. It’s hard to be a 19-year old girl in a world of mature, grown ass women, and I think it did her a favor to not be featured.

In at number three this week was John Cena’s story of pooping his pants during a match in Canada, thanks to a bout of food poisioning. I just could not and judging from the look on Nikki’s face, she couldn’t either.

Speaking of Nikki, she is involved with our number two hidden gem of the week. During a walk with Brie and Brie and Daniel’s daughter, Josie, Nikki had to pretend to take a photo of Josie while she was popping a squat in a potted plant. Apparently, Josie doesn’t like to do her business on the concrete so Brie took it upon herself to sit the adorable dog in the plant. Classic.

And of course, I would be hard pressed to find another moment as glorious as the one that happened during a singles match between Naomi and Natalya. During the match, Nattie got hit in the bladder and that made her tinkle just a wee bit. It upset the third-generation Diva so much that she refused to be nice with Naomi after the match, worried herself to death about her singles match at SummerSlam, and hurt her ego so bad she couldn’t deal with Foxy’s good-natured ribbing. I’m pretty sure the best part is when Nattie was in the shower stripping down, E! blurred the pee stain on her tights.

I love this show so much. Oh, and to quote our own Bobby, “the Total Divas season preview just rocked my entire world.”