Trash Talk: Giving Credit Where Credit is Due 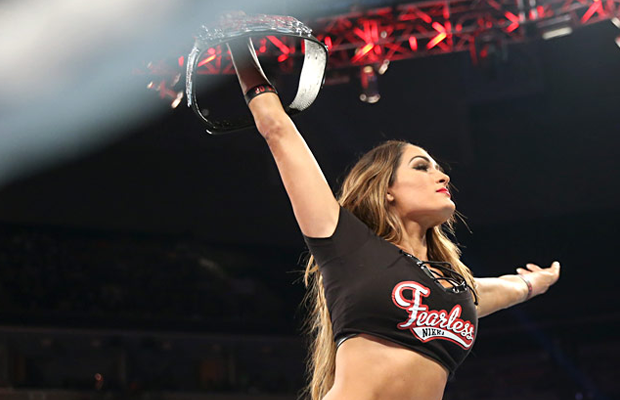 Trash Talk is a new column from Diva Dirt’s Jake. Got a suggestion for his next column? Send it in.

On this week’s episode of Raw, Nikki Bella became the longest-reigning Divas Champion in history. While this marks a huge moment in the history of the Divas division and the title itself, social media seems to be giving someone else credit for Nikki’s reign…and it isn’t the Divas Champion.

A story broke on sites this week, claiming that John Cena is heavily behind Nikki Bella’s record-breaking title reign and that if, she were to retain her title on Monday (which she did), then it would only be because of Cena’s backstage influence. Despite the report not citing any sources or quotes, people chose to believe it as true. Some of those same sites spent the entire rest of Monday tweeting negatively about Nikki from their website’s personal Twitter accounts, not even their personal ones.

As I read the obviously fabricated story, I began to think that I’ve read this before. Then it clicked: I HAVE read this before…just with different players. In fact, I read exactly the same site the previous week saying that if Nikki’s opponent Charlotte were to walk out of Raw with the Divas Championship, it would only be because of Ric Flair’s influence. Wait…that might not be the story I’m thinking of. Maybe it was the story that Michelle McCool was only crowned the first Divas Champion because The Undertaker told the powers-that-be to put the belt on her? It could possibly be the story that AJ Lee held the Divas Championship for so long because of CM Punk’s backstage power. Nope, I remember now: it was the story claiming that Natalya only won the Divas Championship because her uncle Bret Hart complained.

The fact of the matter is this: we’ve seen this story before and it’s old. Sites have continuously been generating the same story that credits the men in Divas’ lives for them getting ahead or hold any championship in WWE. The worst part of this situation is that some of the very people who claim to support the Divas progression are the ones spreading the lies.

Let’s face it: professional wrestling a men’s dominated sport – a boys’ club, so to speak. It’s extremely hard for women to get ahead or break out as a legitimate star, especially the women who have real life relationships with fellow performers.

If you take a look at the red carpet at the WWE Hall of Fame ceremonies, WWE treats the Divas who arrive with their boyfriends/husbands as merely arm candy. Former WWE Diva Maryse arrives every year alongside husband and WWE Superstar, The Miz. While Maryse is no longer employed with WWE, you’d think they’d give her the respect of mentioning her name, let alone the fact she was the longest-reigning Divas Champion for five years. Her accomplishments don’t exist. The same goes for every other woman who comes down that isle. No matter how many titles they’ve won or stellar matches they’ve had, the correspondents are only speaking to the men and will occasionally cut to the Diva at their man’s side to ask what dress they’re wearing. Where are the questions about their upcoming WrestleMania match? Or what it means to be attending the Hall of Fame? It’s only about the men.

When AJ was putting on stellar matches following the WWE departure of her now husband CM Punk, belligerent fans would chant his name while she worked her ass off to entertain the audience. It was blatant disrespect. No matter who you’re a fan of or not, no woman deserves to be disrespected like that.

The men have nothing to do with the accomplishments of the women. CM Punk did not lock Kaitlyn in the Black Widow to win the Divas Championship. The Undertaker did not unify the Women’s and Divas Championship. Daniel Bryan did not take on the Chief Branding Officer of WWE at SummerSlam. DIVAS DID. Divas have trained. Divas have worked hard to show they are more than everything the casual wrestling fan will see them as. They’re athletes. They’re champions.

We (and by we I mean the fans who think they know more than everyone else) need to stop giving the men credit for the accomplishments of the women. A Twitter follower recently told me that I have to give John Cena credit for Nikki’s reign and even included a photo from Wikipedia of someone changing Nikki’s name to “John Cena” on the Divas Title page. Whatever joke people think they’re making or whatever point they think they’re getting across, they’re wrong. That is sexism, plain and simple.

By saying a woman is only getting ahead in a company because of their man is holding women back even more. And talk about irony: these are the very same people who exclaim how much they want the Diva Revolution to succeed! The Revolution is not just about the women you want to break the mold, it’s about ALL of the women in WWE. It’s about reshaping a division and showing fans something some of us have known was there all along. This is the chance for the women to shine and show who they’re dating or who they’re related to is irrelevant. Nikki and Charlotte worked their asses off on Raw and deserve all the praise in the world for that, not Cena or Flair.

You want a revolution? It all starts with respect.