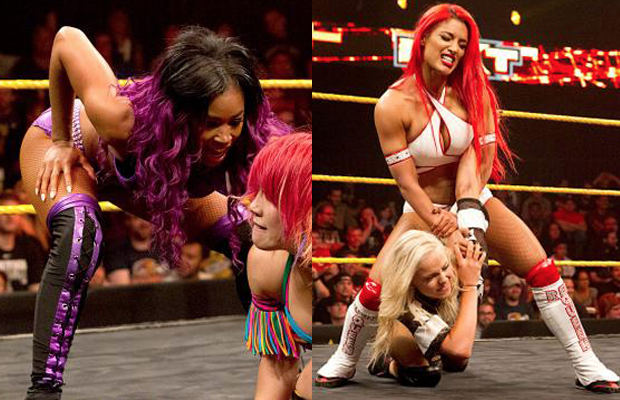 Last night on NXT we were treated to not one but two Divas matches on NXT. Any women’s wrestling fan would be cheering but many last night actually expressed their disgust that Eva Marie and Cameron were the highlighted Divas competing. Most of the complaints I saw were about how these women aren’t wrestlers and should be on TV. I think it’s time to say something about this.

It’s insane how quickly people jump to the opinion that these women aren’t wrestlers and they have no place in WWE. Their matches last night not only discredited this theory but also showed that they’re working just as hard, if not harder than anyone in the WWE right now.

First up last night, Cameron returned to the WWE after not being seen for months. We know now that she’s been busy training to become the best competitor she can be and working on anti-bullying campaigns. The fact that she’s using her time off to not only improve at her job but to use her celebrity to give back speaks volumes about her character.

Many of the reviews I saw for her match said she has no character or skills and that made me wonder if these reviewers even watched the match. Every time Cameron is in front of an audience she displays more charisma than the entire male roster, incorporates new taunts into her repertoire and works hard to draw a reaction. Sure, much of her reaction on NXT was from ignorant fans but she worked her ass off. Being placed against an opponent as skilled as Asuka is going to be a challenge. Your weaker spots are going to be much more evident but I personally feel Cameron held her own in the match. It wasn’t a classic but she made Asuka look strong and established herself as a heel in the process. The slap into Asuka’s submission was one of the most beautiful and gif worthy moments I’ve seen this year.

Cameron joining the NXT brand can only help further her training and character. She has the exact over the top personality that fits and works so well in NXT. I wouldn’t be surprised to see her be paired with a struggling tag team or male superstar to help get them a reaction. I’d also like to see her continue her progress in the ring.

Eva Marie also had a match against NXT’s newest Diva, Marley. I wasn’t sure how this would play out at first considering the lack of experience from both women but it actually turned out to be watchable. Marley showed a lot of promise and someone whose willing to learn more in the ring. Eva continued to improve as well.

It may not have been Eva’s best showing in the ring but she was also paired against someone whose still learning the ropes as well. I think NXT management needs to focus right now on pairing Eva with opponents who can really help her improve. It’s next to impossible for two novices to make each other shine while they’re still not confident. It can also prove to be quite dangerous. A prime example is Carmella’s injury from a few weeks ago. Granted, no one was seriously injured but the way the internet reacted you would have though Eva paralyzed Carmella for life. Calm down, people. Situations like this can be avoided by pairing experts with beginners in matches and they can work together.

With that being said, Eva is continuously improving in her matches. I really am loving the new found confidence she’s displaying as of late. Her personality is really beginning to shine now that she’s embraced the negative reactions from fans. Their chants and rude comments towards her are only fueling the fire more. She’s growing.

I have no doubt that her in-ring skills will match her personality soon enough. Her progress is quite impressive from where she was a few months ago. She’s trying more daring moves, working new maneuvers into her repertoire and even hesitating much less during her bouts. She’ll get there. Look at Nikki Bella. She was once a beginner in her own right and is now the PWI’s Top Female of 2015.

Cameron and Eva Marie are working hard but directing negativity towards them isn’t going to help them improve any more. Fans talk about how they want them to improve as wrestlers and show more personality which they are doing yet people are taking their time to tweet death threats and horrible comments towards these women. They are working to improve. How is tearing them down going to boost their confidence with that?

I’ve heard the argument that as fans we have the “right” to yell comments at performers we hate. Yes, as a member of the audience you can react however you want but harassing someone isn’t a right, it’s actually a crime. No one in the audience is there to listen to your jokes, your raunchy words or see you flip off the talent. They are there for the talent who is working hard for you. They don’t owe you anything but continue to take their free time to train and grow as performers. Show them the same respect they are showing you and give them a chance.