Trash Talk: The Future is Now 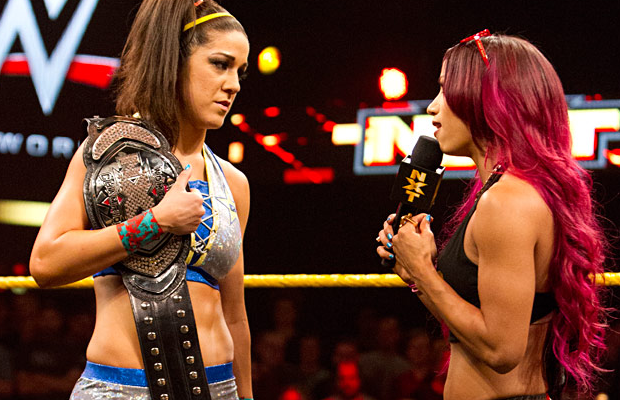 October 7th. Eight years ago today, Beth Phoenix won her first Women’s Championship. I remember the feeling I had that night. This was the start of a resurgence in the women’s division. Beth seemed like the piece that was missing since the departures of Trish Stratus and Lita about a year earlier. Her feud and matches with Candice Michelle were fresh and exciting and I knew this would be the start of breathing life back into the division. My hopes continued as Candice and Beth competed in a 2/3 Falls match weeks later. Unfortunately, Candice was injured and the division fell into limbo again.

I was right about Beth, though. She continued to excel in a world where stipulation matches and aggression for the Divas was practically unheard of. During her WWE tenure, Beth had the opportunity to compete in the first Divas Tables match, an “I Quit” match and an Extreme Makeover match (essentially a Hardcore match). Beth had also competed in a Ladder match down in OVW before she even made her main roster debut. Opportunity was there for her. Unfortunately, the rest of the Divas were left out of the equation and stipulation matches were hard to come by.

The opportunities for stipulation matches in Diva feuds were always there. I know last year many of us were hoping to see AJ Lee and Paige compete inside of the Hell in a Cell to cap off their six month feud or even AJ Lee and Kaitlyn in a street fight about a year earlier. Even the iconic Trish Stratus and Lita feud never had a stipulation match. Out of the hundreds of times these two women faced each other, not once was there an extreme stipulation invoked. There were many opportunities for the ladies to send their feuds off with a bang, but WWE was always scared.

Fortunately, it looks like that fear may slowly be diminishing.

October 7th. Tonight, Bayley and Sasha Banks will collide for the NXT Women’s Championship in the main event of NXT TakeOver: RESPECT in an Iron Man match. There will be a 30 minute time limit and the first woman to gain the most pinfalls and submissions will be declared the winner.

When I first heard about this match, my jaw dropped. I couldn’t believe the WWE is actually ending this perfect feud in a such a perfect way. I really couldn’t believe it. The women in NXT have been granted so many incredible opportunities and stolen the show every time. The one thing that has alluded them until now is the possibility of stipulation matches. Charlotte and Sasha Banks had a series of classic matches over the last year, but not one of those matches included a special stipulation such as a Ladder match or an “I Quit” match. I was honestly hoping we would see that, but never got the chance.

The chance Bayley and Sasha are getting is not only a chance to make history and main event a live special, but also making history for the Divas. This is the beginning of something big for the women’s division. In a match with so much attention on it, it’s WWE’s way of saying they trust the women to put on a show. They trust them to be capable of working these extreme type of matches and really showing what they can do in and out of the ring.

Now that trust has been established, it needs to trickle its way to the rest of the women. Imagine the possibility of seeing Nikki Bella vs. Charlotte in a Last Man Standing Match or Paige vs. Natalya in an Ultimate Submission match. The women are proving they can hang with the men with their longer matches, so the WWE needs to give them the chance to break free and really tear the roof off the building. I honestly believe tonight’s match will be the beginning of stipulation matches being a norm for the Divas.

When thinking about the future, you can’t help but think about the past and how far the Divas have come. Before this Iron Man Match and Beth Phoenix’s career of stipulation matches, Trish and Victoria’s brutality in street fights and Chyna’s dominance over men in hardcore matches, the women were competing in Evening Gown matches. Not really even Evening Gown matches, but really just someone getting their clothes ripped off 30 seconds after the bell rang. We’ve come a long, long way.

So when watching tonight’s match, don’t just think about how fantastic it is, how big it is that this is the main event. Think about the history. Think about how Sasha Banks and Bayley are breaking ground for the future of the division. How they are putting it all on the line and letting us know that Lay-Cool going through a table, Melina being snapped in half by Beth and Victoria getting her nose busted open by Trish was not done in vain. It was for this moment. This match. This division. This future.