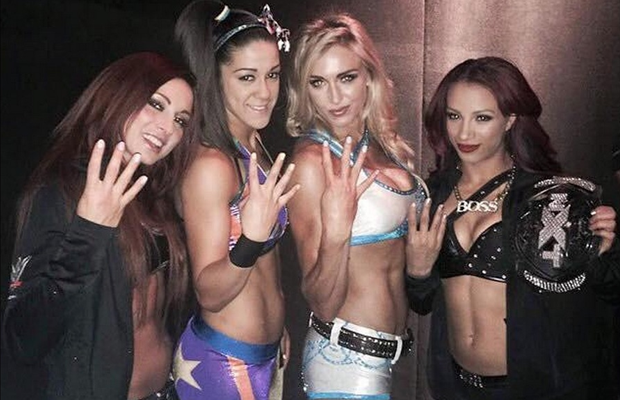 Trash Talk is a new column from Diva Dirt’s Jake. Got a suggestion for his next column? Send it in.

One of the highlights of most wrestling fans’ years is the release of the annual WWE video game. Years ago, we would have several different games come out a year for all of the various platforms, but for the last few years it’s been the 2K game every year. One thing that is almost always the subject of controversy with these games is the roster reveal. This year was no exception.

The roster was revealed for WWE 2K16 over the past few weeks on IGN. Fans would be logging in every Monday to make sure their favorite Divas and Superstars were among the chosen for the game. Things were looking pretty promising for Diva fans this year, which can always be hit or miss. We had Paige announced right away, marking her first official time being a regular character in the game – last year, she was just a downloadable character. As the list grew, it was basically every Diva who made the cut last year with the new addition of Eva Marie and returns of Alicia Fox and Layla. The roster was actually fairly decent. Far from being the worst roster ever, it actually included the majority of the Divas.

As Diva fans rejoiced some of the rarely used women being included, things took a turn. After the final roster reveal, fans couldn’t help but notice the absence of NXT’s Four Horsewomen: Charlotte, Sasha Banks, Becky Lynch and Bayley. This was definitely a head scratcher, as these four Divas have been one of the hottest attractions in WWE over the past year. Arguably, they are one of the biggest reasons behind NXT’s success. Despite these NXT stars not being included, we saw additions of The Vaudevillians, Enzo and Cass, Hideo Itami and other NXT stars that are featured on television far less frequently than the Divas.

Fans remained hopeful, believing that the four would all be a part of at DLC pack shortly after the game’s release, as Emma and Paige were last year. Unfortunately, that was not the case. After a backlash of angry fans, 2K Games announced that these women would NOT be featured in the game despite currently being main roster stars and having reignited an interest in women’s wrestling over the past year.

In my opinion, there is no acceptable excuse for their lack of inclusion. Sure, we can always create them now that 2K finally put Create-A-Diva back into the game, but that’s not really the same. We shouldn’t have to create performers who have earned a place in the game. They certainly deserve a place in the game over legends most of today’s fans aren’t familiar with or one of the character slots taken up by a performer in a different costume. Hell, even Arnold Schwarzenegger made the cut for this game despite only making two or three WWE appearances in his life. That alone is insulting.

I’m not really 100% sure of the reasoning behind the decision to not include Charlotte, Becky, Bayley and Sasha. Some of them now have action figures and all have various merchandise through WWE, so it’s just puzzling that someone wouldn’t want to capitalize on this gold mine and include them in the game. There may not be a career mode for the Divas, but that should not effect whether or not they’re playable in the game. This is a huge oversight on 2K’s part.

Even though we won’t have the ladies in the game, it’s not a total loss. As I eluded to earlier, we have women who many thought wouldn’t make the cut in the game, an actually pretty large Divas roster and, of course, Layla’s final video game appearance. This is far from the worst roster we’ve ever had for a video game. To keep things light around here, let’s take a look at times the Divas roster was worse than WWE 2K16.

SmackDown vs. RAW 2006 – If any video game company attempted to pull something like this today there would be HELL to pay. Let’s see who was had on the roster:

We have the obvious choices in Trish, Torrie, Stacy and Lita who at the time were the darlings of the Divas division. I even remember reading a report way back in the day that these four’s jobs were always safe and they would leave on their own terms when they decided to. Lita actually made her return to video games this year after being snubbed the year before (another trainwreck roster). While we had these four, the rest of the Divas roster was quite random. Christy Hemme made her first and only video game appearance, which was actually pretty well deserved. She participated in the Women’s Title match at WrestleMania that year and had actually developed a great character and was improving her in-ring skills (those moves didn’t make the game). Then we had Joy Giovanni…who was in WWE maybe four or five months and whose only moment of note was being caught in the shower by Kurt Angle. Despite never having a match, Joy had a full moveset. Michelle McCool was included in the game despite being sent back to training and only appearing in one or two matches. Obviously absent were Victoria, who dominated the division the summer of ’05; Dawn Marie, who was Michelle’s opponent for most of her matches; and Candice Michelle, who was becoming a big character in WWE. 2005 was a strange year for Divas in the WWE, so this roster is partially forgivable though. Just puzzling.

WWE 2K13 – Some fans actually LOVED this roster. I must admit, there are a few highlights. We had a classic Trish Stratus, Lita and Stephanie McMahon in this game that was Attitude Era-themed…although Trish and Lita were not even in their Attitude Era attires. Trish was wearing one of her 2002 outfits, which was a part of the Ruthless Aggression era and Lita was wearing something that looked similar to her outfits she wore during her time with Edge. Stephanie was appropriately dressed, however. I remember fans being pretty irritated random Attitude Era stars were included in this game, but no real Attitude Era Divas made the cut. Obviously snubbed was Sable, who I’m sure could have been included now that her husband Brock Lesnar is on good terms with the WWE. Chyna was also not included, but unfortunately this wasn’t a surprise. Jacqueline, Luna, Ivory, Tori and Debra were also no where to be found in the Attitude Era format of the game.

The current roster was perhaps the most disappointing part. Our roster consisted of:

The roster was essentially the DLC Divas pack for WWE ’12. At the time, that Divas pack was greatly appreciated the year before, but this just seemed lazy. It was a rerelease of all the women we had seen the year before with really no new characters aside from AJ (who was a DLC despite not being a new character on TV and being heavily involved in all storylines that year). Kharma also made the cut for this game even though she made one TV appearance the entire year. The Bellas had also left WWE several months before the game’s release at this time and their inclusion was also confusing. We had to pay a little extra for Layla and Nattie, which wasn’t a surprise, but many fans were left disappointed with the absence of Aksana, Kaitlyn, Tamina Snuka and other women who had made waves that year.

SmackDown: Just Bring It – In my opinion, this roster was the WORST Divas roster in the history of any WWE video game. The year prior, we were treated to a HUGE roster and were honestly spoiled with characters like The Kat, Tori, Jacqueline, Ivory, Chyna, Lita, Trish and Stephanie all in one game. It was the first roster that was significant for Divas in WWE video games. SmackDown: JBI became our disappointment in video games for Diva fans. We had an exciting five Diva roster for this game:

The video game debut of Molly was exciting and well deserved, as she had headlined feuds with the Dudleyz that year. Lita was a must-have in this game, as 2001 was one of her biggest years. Trish also made the game, to no one’s surprise, but her character was in some weird outfit I don’t recall her ever wearing. Stephanie was a hidden character in the game and Ivory was included. They quickly changed her attire to her updated black outfits she began wearing the summer of 2001, but her entrance was still her Right to Censor gimmick, only with her newer theme. It looked as weird as it sounds. While some of these choices were great, it was disappointing to not see Chyna in the game. Chyna had left that summer, but at the time of the game’s release was still the reigning Women’s Champion. Sure, there was some controversy behind her release but if FRED DURST could be included in the game, Chyna should have also made the cut. Others that were noticeably absent were Jacqueline, Terri, Tori and newcomers Torrie Wilson and Stacy Keibler. In fact, hardly any Alliance members were in the game.

All in all, the lack of Four Horsewomen in WWE 2K16 is upsetting, but it’s not the end of the world. I know we’ve been told that the ladies won’t be DLC in the game for this year, but who knows if this is just some cheap marketing ploy to drop a surprise announcement on us last second? I’ll miss their inclusion if they’re not in, though. There are some incredible CAW creators out there though and I’m sure someone will come up with a stellar recipe if we don’t get the ladies.

Hopefully, by this time next year, 2K Games will have realized they’re sitting on a gold mine.