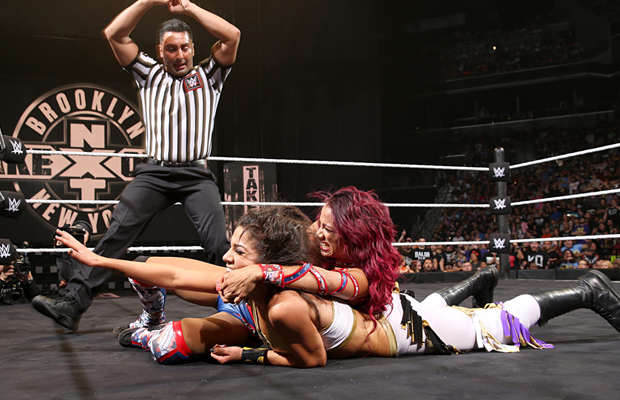 Bayley vs. Sasha at TakeOver: Brooklyn: HHH thinks the match was huge, but there are other and will be more moments that are just as huge. It all builds to where it will end up. He put over Natalya and Sara Del Rey for their roles. He mentioned Ronda Rousey and the US Women’s Soccer Team. He thinks they are in the mix to do that for women in wrestling. He said their Brooklyn match was one the greatest he has ever seen. He said that the world is saying that they are phenomenal, passionate athletes that make the sacrifices necessary, just like the men. He said to say that one moment is what made it happen wouldn’t be fair. It’s a giant wheel of momentum and a lot of people are a part of that. All of the women have started the revolution and they will continue to be.

The possibility of Divas wrestling in cages and cells: He said the opportunities should be there for women. He also said that when they planned to do the match, they debated whether to call it an Iron Man or Iron Woman match. He thought Iron Man and asked Lita and she said she thought calling it Iron Woman would be demeaning. So they went with Iron Man.

Vince’s reaction to a women’s main event: He said he told Vince he was doing it and Vince was fine with it. He said if people want to see it, great. HHH said that Vince does have a different way of presenting women on his roster, but he lets HHH book his product his way. He could, of course, overrule him but that isn’t the case. He said that Vince came to Brooklyn and just watched, which is hard for him because he likes to put his fingerprints on it. He said he was happy Vince came and watched. He said Vince enjoyed it. Vince told him yesterday he can’t wait to watch Bayley and Sasha tomorrow night.

Asuka vs. Dana Brooke: He said that he thinks Asuka debuting is another cog in the wheel of the women growing. He talked about Hideo Itami coming in and it was a struggle and that happens. He compared college football to the NFL in that there is an adjustment process. He said what he has seen of her so far tells him that she will be great. She has an innate charisma as well.

Vince’s thoughts on the Four Horsewomen’s “curtain call”: He said Vince loved it and thought it was a great touch. He said it’s all about selling the emotion and that came out. He said it’s not bad for the heel to show the emotion, it’s real. He said fans now more than ever get that. They know as much of the reality of the business as they do the story now. If you present it correctly, it makes it magical.

Read the full transcript on PWInsider.